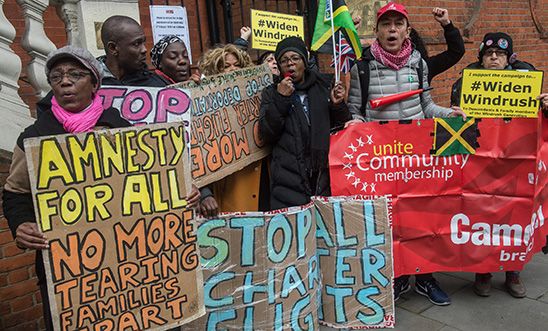 On Tuesday, the Government deported around 20 people on a flight to Jamaica. It had intended to deport many more but was prevented from doing so by a court when it was clear that some people had received no proper opportunity to secure legal assistance before being expelled.

Access to lawyers and courts to protect people against unlawful removal from the country is vital. However, the injustice associated with this flight goes further. Of particular importance is the deportation of people who have grown up in the UK as British as any of their peers with whom they served their criminal sentences.

A history of exile

In centuries past, the UK used to banish people who were convicted of crimes or deemed ‘socially undesirable’. This barbaric practice ended in 1868 when the last British colony receiving convict ships joined others in refusing to do so any longer.

Nowadays, banishment is officially ended. People convicted of offences in the UK serve the sentence including imprisonment that a court and the criminal law considers appropriate for the offence.

But deporting people to places they have never been – or have little or no memory – continues. Not as part of any punishment of the justice system. This exile is inflicted under Home Office immigration powers.

There are several injustices

Ministers, and others, have sought to side-step this by repeatedly emphasising that nobody facing deportation is British.

That is to ignore both the reality to people’s lives and the clear purpose underpinning the laws that determine British citizenship. Parliament intended that all children who grow up in and connected to this country should share its citizenship. It recognised that failing to ensure this would cause individual, social and racial injustice.

That racial injustice is compounded because the decision to deport is generally based upon a criminal justice system that itself suffers from racism with disproportionate impact on black, Asian and ethnic minority people.

Depriving British people of their rights to citizenship

However, the Home Office habitually disrespects children’s rights to British citizenship. It not only fails to act to ensure that children – including children born in the UK – do not grow up unaware they are not on an equal footing with their peers even though it is their right to be citizens too. It actively obstructs these rights.

For example, it demands a fee of £1,012 for a child to register as a British citizen even when it is the child’s right to do so. And it excludes many children from this right by applying a good character test even to children as young as 10.

One reason campaigners and others are right to link the #Jamaica50 flight with the #Windrush scandal is that in both cases British people have been wrongly deprived of their rights to British citizenship and as a result subjected to immigration powers.

And injustice to others

It is not only people being deported who are made to suffer injustice.

There are the families – including the parents, the partners, the siblings and the children. Exile is not merely from a place, it is from a home, family and community. Everyone one of them suffers too – particularly children forced to grow up without their parent or to be uprooted to a place they do not know.

And there is the community to whom the exile is sent. It is often overlooked. But why should Jamaica or any other country, and its residents, be compelled to take responsibility for the rehabilitation and social reintegration of someone from this country?

These are not the only circumstances in which deportation is unjust. But they are among the most serious. As Tuesday’s flight again highlights, they are far from uncommon.