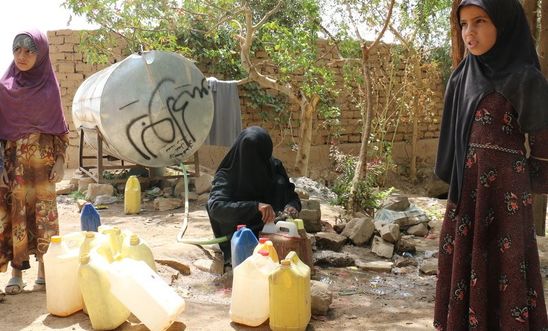 By Kate Nevens, interim Programme Director for Amnesty International in Scotland. Kate was previously Head of the Middle East and North Africa Programme at Saferworld, where she ran a large peacebuilding programme in Yemen.

Last week, a fighter jet flew low and fast over the city of Edinburgh. We were in a team meeting and I froze, feeling the blood drain from my face. My colleagues looked questioningly at me while I mentally relived all the phone calls with my friends and former colleagues in Yemen, where the same sound would mean a hasty hang up while they rushed to the safest point in the building, followed by an agonising wait until they were back in contact to let me know they were okay. And later, discussions of the death toll - how many people this time? Was it anyone we knew?

This time it was an RAF Typhoon aircraft conducting a ‘flypast’ of the castle in my current home city of Edinburgh, I discovered after our meeting ended. The exact plane the UK is selling to Saudi Arabia to be used to fuel the war in Yemen.

The conflict in Yemen has now been raging for more than three years. The war has had a devastating impact on the country and the people who are trying to live their lives among the ruins of their homes. Thousands have died in the violence, thousands more of cholera, malnutrition and other war-related diseases. Millions are at risk of famine, and Yemen is now considered the world’s worst humanitarian crisis. Yet Yemen still struggles to make international headlines.

“Three years on, Yemen’s conflict shows no real signs of abating, and all sides continue to inflict horrific suffering on the civilian population. Schools and hospitals lie in ruins, thousands have lost their lives and millions are displaced and in dire need of humanitarian aid,” says Lynn Maalouf, Director of Research for the Middle East at Amnesty International.

In the midst of war, human rights abuses continue to escalate. All parties to the armed conflict are committing war crimes and other serious violations of international law. The Saudi Arabia-led coalition forces have been bombing civilian infrastructure and carrying out indiscriminate attacks, killing and injuring civilians at markets, weddings, factories, schools and hospitals. They’ve also imposed a sea and air blockade that is preventing food, fuel and medicines getting into the country. The rebel Houthi forces have been indiscriminately shelling civilian residential areas, using banned landmines, and well as arbitrarily arresting and detaining Yemenis who they perceive to be opponents.

Across Yemen, human rights defenders and civil society activists are facing incredible dangers, directly targeted by the Houthis and other militias for their work. As much as news of bombings, the Whatsapp messages and phone calls I now dread are those telling me that someone has been abducted, or someone has disappeared, for monitoring human rights or for calling for peace.

A recent Amnesty International report documented two cases in which a total of four people were sentenced to death by the Huthi-controlled Specialised Criminal Court in Sana’a. These include Hamid Haydara, who belongs to Yemen's Bahá'í community, as well as Asmaa al-Omeissy, Saeed al-Ruwaished, and Ahmed Bawazeer, who were accused of aiding an enemy state. The defendants faced grossly unfair trials; they were subjected to enforced disappearance, lengthy pre-trial detention, torture and other ill-treatment, and had no access to lawyers.

The UN has described the situation in Yemen as ‘catastrophic’, and the suffering being inflicted on Yemeni citizens is unfathomable. The UK and other international governments urgently need to end their weapons supplies and put their weight behind a political solution to the war, where all parties to the conflict in Yemen are held accountable for the human rights atrocities the country has endured.