Taser and spit hood use by Police Scotland 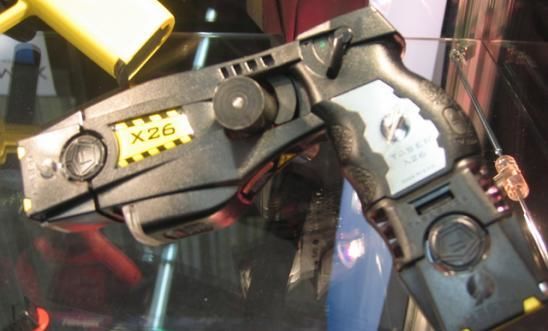 Tasers use in Scotland has been fairly limited with 113 uses since April 2013, 7 of which were on minors, the youngest being 15.  A limited number of specialist officers are trained in the use of the device.  However, in the wake of the recent attack in Westminster it was announced that police officers on duty at the Scottish Parliament would routinely be armed with Tasers.

News of arming of officers comes at a time when there is still great concern around the impacts of tasers, and a lack of publicly available data to allow monitoring of their use and the implications. There are regular calls for more officers to be routinely armed with tasers and this is against a backdrop of an ongoing increase in the arming of officers with firearms.  However the Scottish Government do not want to take any responsibility or accountability for the decision making process with regard to arming of officers with tasers – routinely stating it is an ‘operational decision’.

Criticisms of the lack of data collected on the use of tasers and spit hoods is becoming ever more apparent.  Data that is publicly available is from the Police Investigations and Review Commissioner (PIRC) – these are brief reports of situations where tasers have been drawn or fired.  Two of the more alarming cases are when a “man sustained an injury which has caused him to lose the sight in one eye”, and of the use of a taser on a 15 year old  boy, after police fired a baton round (a rubber or plastic projectile, fired from a special gun – usually associated with use in riot situations) at the child.

The safety of tasers has long been questioned by Amnesty International in Scotland.  Yet there is still little data collected about the use, and so drawing conclusions about the overall effectiveness is incredibly difficult.

Commenting on the use spit hoods, Oliver Sprague from Amnesty International UK previously said “Spit hoods can restrict breathing, create disorientation and can be dangerous and extremely distressing … Serious questions must be asked as to whether these restraints which have been criticised for breaching human rights guidelines should actually have a role in modern British policing.”

In November 2016 Amnesty International in Scotland wrote to Police Scotland using Freedom of Information (FoI) legislation to ascertain what guidance was given to officers in the deployment of both tasers and spit hoods.  Their response showed that data collected on the use and impacts of both tasers and spit hoods was insufficient – which means that we can only assume there is little to no analysis done on the impacts. Copies of these letters can be downloaded below, along with additional information from Police Scotland.

The reason to collect and monitor data on Taser and spit hood usage is not to use it as a way of catching the police out or because it is assumed that they are being abused. Effective monitoring and evaluation leads to better policing; you can identify trends, unravel problems or reveal ineffective policing tools as well as showing whether certain communities are disproportionately impacted or targeted. The Metropolitan Police have a Reference Group for Taser usage which includes organisations that represent BME communities, people with mental health issues and children – who in London are all disproportionately Tasered – as well as Amnesty International, academics and health professionals to scrutinise the data and make recommendations. There is no equivalent stakeholder engagement in Scotland.

Claire Baker MSP and Scottish Labour’s Justice Spokesperson in Holyrood, has submitted series of questions regarding the use and impacts of both spit hoods and tasers by Police Scotland.  In the most recent of these (S5W-08511 and S5W-08510) Ms Baker is attempting to ascertain why data on spit hoods is not collected, and if the Scottish Government are willing to instruct Police Scotland to report this data.  Similarly, with tasers Ms Baker is looking for data on use of tasers and complaints associated with these cases.  This is data which Police Scotland were unable to provide when Amnesty in Scotland requested the data in our FoI – so we await with interest to see if the Parliamentary Question process can reveal any more.

Amnesty International in Scotland has serious concern about the lack of transparency around the issues of spit hoods and taser use.  We believe that the Scottish Government should i) call for a review of their use which engages with stakeholder organisations and ii) call for Police Scotland to publicly provide data on their use and implications to aid analysis and decision making on the suitability of their use – especially given the context of increasing the routine arming of some officers.