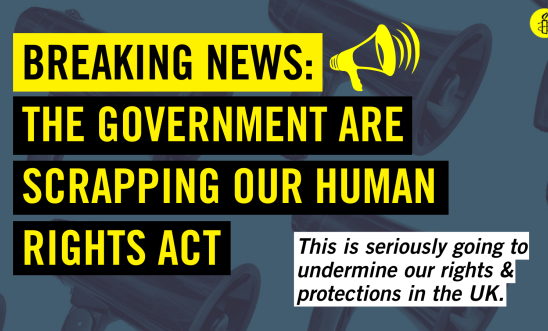 ‘The Human Rights Act is the cornerstone of people power in this country. It’s no coincidence that the very politicians it holds to account want to see it fatally weakened’ - Sacha Deshmukh

Amnesty International has branded the UK Government’s controversial Bill of Rights which was laid before the Commons for the first time today a ‘giant leap backwards’ for the rights of ordinary people.

“Ripping up the Human Rights Act means the public is being stripped of its most powerful tool to challenge wrongdoing by the Government and other public bodies. This is not about tinkering with rights, it’s about removing them.

“We are concerned that the new legislation will interfere with devolution in ways that have not been properly considered or understood. The recent consultation by the Ministry of Justice gave scant regard to the separate legal system in Scotland, asking only one vague question about reforms reflecting the different legal traditions across the UK. We have no confidence that these issues will be properly considered during the process of this Bill

“We believe it is vital that the Constitution, Europe, External Affairs and Culture Committee conduct an Inquiry into the devolution impacts of the changes to the Human Rights Act so that both the Scottish and Westminster Parliaments can provide proper scrutiny of such an important and fundamental part of the UK’s constitutional legal framework.”

Bruce Adamson, Children and Young People’s Commissioner in Scotland said the proposals risk stripping away existing children’s rights just over a year after MSPs of all parties voted to extend them by incorporating the UN Convention on the Rights of the Child into Scots law.

“Having rights enshrined in law is the best way to ensure rights are respected, protected and fulfilled.  The Scottish Parliament unanimously passed a law last year to protect children’s rights by incorporating the UN Convention on the Rights of the Child into Scots law, yet delays have meant that children are still waiting for this to happen. Now proposals from the UK Government to reform the Human Rights Act risk stripping away the protections children do
have in law. The Scottish Parliament in its role as a human rights guarantor should do all it can to ensure that children’s rights in Scotland are protected, respected and fulfilled.”

“We fear these proposals could restrict our rights and reduce access to justice – making it harder for people in Scotland who face discrimination and inequality to seek protection from harm and redress for injustice.  We support the urgent call for this Inquiry because we believe that we must all work together, and swiftly, to ensure that the devolution impacts of these proposed changes are fully understood by the Scottish and Westminster Parliaments before this legislation is passed.”