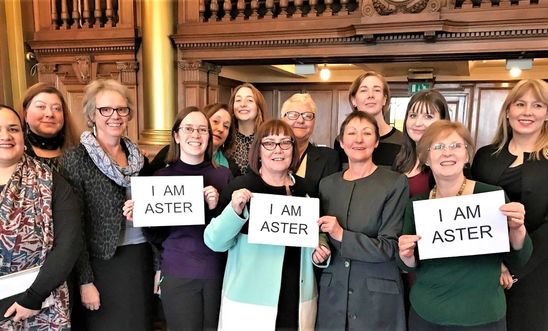 On September 18th, 2001, the Eritrean politician, Aster Fissehatsion was arrested.  She had signed a letter calling for more democracy in her country.  Aster was never charged with any offence nor did she face any court but, from that day to this, no family member or friend has had any contact or information about her.

Female politicians across the world face particular risk in their jobs - they are visible, outspoken and in positions of authority which makes them targets. So we have encouraged women in politics from all political parties to come together and show their solidarity with Aster by asserting 'I AM ASTER'.

Three Members of the Scottish Parliament from three different political parties started the ball rolling.  Amnesty members from across the UK began writing letters to their elected female representatives and the power of a simple letter was shown.

MPs and MEPs have also answered the call.

Even some male politicians have said that they also identify with the rights of Aster and wanted to state ‘I AM ASTER’!

Aster is still ‘disappeared’, as are the twenty other politicians –including Aster’s former husband and journalists who were arrested so many years ago. Aster’s son, who was a child when both of his parents were arrested, now lives in Europe but thinks of his mother every day and still dreams of embracing her again

May 24th marks the 67th birthday of Aster.  Paradoxically, that day is celebrated across Eritrea as Liberation Day, marking the 27th anniversary of the independence of Eritrea but, for Aster and many others, there is no liberation.

Please join the campaign: you could write ‘I AM ASTER’ on a piece paper, have your photo taken and then send it to the President of Eritrea with a copy to the Eritrean Ambassador in London, asking for the liberation of Aster.