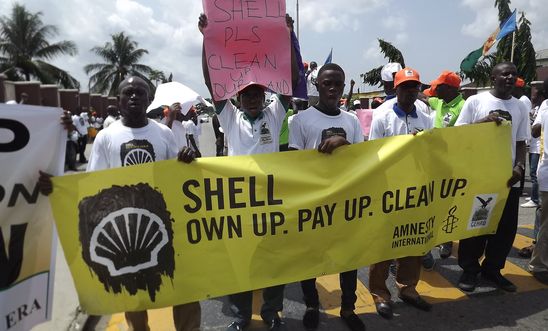 Oil spills have contaminated the Niger Delta for over 60 years. As courageous campaigners take the fossil fuel giant to court, will this mark an end to its polluting business model?

60 years of poorly maintained pipelines and wells, along with inadequate clean-up practices have damaged the health and livelihoods of over 30 million people living in the Niger Delta – most of whom are stuck in poverty.

While Shell’s reputation has been tarnished, the company’s ‘business as usual’ approach in Nigeria continues.

However, individuals who’ve lived through decades of oil spills have been filing law suits against Shell in the UK and the Netherlands.

40,000 people from the Ogale and Bille communities of the Niger Delta have brought a case against Shell (Okpabi et al vs Royal Dutch Shell et al) for serious harm to their human rights and well-being.

They have been waging a four-year legal battle to gain compensation for the catastrophic environmental damage caused by widespread oil spills.

On 23 June 2020, the UK’s Supreme Court will consider whether Shell can be held liable for pollution caused by its Nigerian subsidiary, which destroyed farming land, wiped out fish stocks and poisoned drinking water. In 2018 the Court of Appeal ruled that Shell did not exercise enough control over its subsidiary to hold it responsible for the well-being of those affected by the oil spills.

The Supreme Court will have to decide if Shell’s parent company is responsible for the actions of its Nigerian subsidiary. Two Niger Delta communities – Ogale and Bille – will tell the court how they have suffered systematic and ongoing pollution as a result of Shell’s operations.

Success could set an international precedent

These cases are not only important for the individuals and communities involved. They could set important precedents on the responsibility of companies for their overseas operations, which would open the way for further litigation not only against Shell but other multinational corporations as well. They are also placing a much-needed spotlight on Shell’s business model in Nigeria.

The revolving door between Shell’s subsidiary and the Nigerian Government – not to forget the brutal campaign to silence the protesters of the Movement for the Survival of the Ogoni People in the 1990s  – has allowed Shell to benefit from weaknesses in Nigeria’s justice and regulatory systems.

Government agencies responsible for industry regulation and enforcement are under-resourced, ineffective and in some cases compromised by conflicts of interest. Nigeria’s courts have failed to offer the victims of human rights abuses a meaningful avenue for seeking justice. Shell has benefitted enormously from extracting oil in such a context where there is little or no government oversight and no effective safeguards.

Meanwhile billions of dollars from oil and gas production have been flowing from Nigeria to its parent company in the UK and the Netherlands. There appears little incentive for Shell to change a strategy that has been profitable for so long, especially when underpinned by a public relations approach that has continuously muddied the waters about the causes of pollution in the Delta, blaming affected communities for their predicament.

If  the plaintiffs are successful in enabling their cases to be taken against the parent company in the UK, then Shell’s business model in Nigeria will come under pressure as other communities in the Delta affected by oil pollution will seek their day in court.

What’s more, such cases could overcome the legal pretence that Shell and other companies use to distance themselves from liability by claiming that the parent company lacks control over the operations of its subsidiaries and therefore that the case should be heard in the country where the damage occurred. In the case of Nigeria there is little chance of the claimants receiving a just legal settlement.

After six decades of contaminating the Niger Delta, the communities that have borne the brunt may finally become Shell’s nemesis.