Remembering the Holocaust: The murder of LGBTI people is not yet history 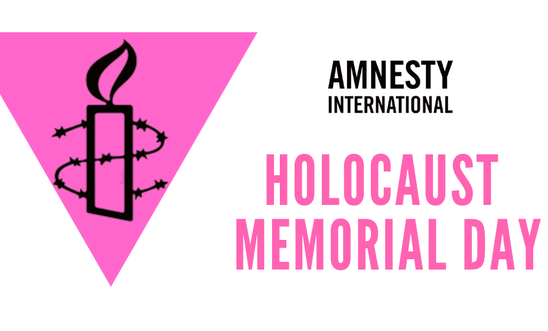 That’s the first thing that often comes to mind when we think of the Holocaust and the indelible mark it has left on the lives of those who were persecuted by the Nazi regime. Six million Jewish people, including children, were murdered between 1941 and 1945.  Mass murder, sanctioned by a Nazi dictatorship, took place in ghettos, concentration and extermination camps, in the streets, and in people’s homes.

Whilst most Holocaust victims were murdered because they were Jewish, there were other groups who also faced persecution (sometimes in addition to being Jewish) for not being part of an ‘Aryan race’. People who were disabled, black, or from an ‘impure’ heritage (such as the Roma people) faced different punishments, alongside queer people.

The persecution of gay and bi men

Even though the process to decriminalise homosexuality had begun in 1929, Adolf Hitler and Nazi Germany brought in penal reform of Paragraph 175, making homosexuality a felony. This was a sign of what was yet to come, with Berlin’s burgeoning queer scenes facing imminent destruction.  According to Holocaust Memorial Day, it is estimated that 50,000 gay and bi men were subject to ‘severe jail sentences in brutal conditions’, usually in police prisons, with around 10-15,000 being sent to concentration camps to meet their deaths from sheer exhaustion. No matter where they went, gay and bi men could be sure to expect medical experiments and castration.

Lesbians, on the other hand, accounted for fewer deaths and prison sentences despite later being included in the penal code. As featured in Pink News, the survivor Pierre Seel (who passed in 2005) reported the use of sodomy with objects, female sex slaves, and forcing lesbians to perform sex acts, as a form of ‘gay conversion therapy’.  Whilst the records on trans people are not clear, with Nazi records on LGBTI people being poor in general, it is easy to imagine the kinds of atrocities trans people would have faced.

These attempts to exterminate LGBTI people from society were made easier by the use of ‘die Rosa-Winkel’ – or the Pink Triangles – which became the most recognised symbol in a series of cloth badges use to distinguish queer people from other prisoners. The Pink Triangle is now a defiant symbol of queer resistance, rising in prominence in 1970s West Germany to mark the history of anti-gay violence.

Surely this is all history now?

Gay violence did not become history at the end of the Holocaust, just as anti-Semitism still prevails in the form of conspiracy theories against George Soros, or attacks on synagogues. After the Holocaust ended, gay and bi men continued to be imprisoned in Germany, with the Allies leaving Paragraph 175 intact after the Second World War. That’s why people didn’t open up about their experiences, as they continued to be punished for the gender identity and sexuality. It was only in 2002 that the German Government quashed Nazi-era convictions against 50,000 gay and bi men, and it wasn’t until 2005 that the European Union officially passed a resolution recognising homosexual people as victims of the Holocaust.

The United Nations (UN) General Assembly adopted the term ‘genocide’ in 1946. Despite the atrocities of the Holocaust, the Armenian Genocide before it, and the countless ethnic cleanses that happened in time gone past, we continue to witness genocides throughout the world, from Cambodia in the 1970s to the current situation in Darfur. We continue to see alarming levels of state violence against LGBTI people in places like Chechnya, where at least two people have died from torture-inflicted injuries.

The future of queer resistance

As the last known Pink Triangle survivor, Rudolf Brazda, passed in 2011, I can’t help but wonder what will become of the memories of the LGBTI victims of the Holocaust. Some groups like SAYiT in Sheffield are commemorating the Pink Triangle survivors through creating a visual installation. Whilst there were no reparations for LGBTI Holocaust survivors, due to not being recognised as victims at the time, maybe a tiny bit of justice can come in the form of recounting their stories, and fighting as hard as we can to ensure the rights of LGBTI people are respected worldwide.

Violence against LGBTI people will not end any time soon, and anti-Semitism still forms a large part of far-right ideology. But so long as we remember the Holocaust, we will never let our opponents forget: we refuse to watch violence in silence.

We will always fight back.

Want to do something to fight back? Tell Putin to stop killing LGBTI people in Chechnya.

Find out more about Holocaust Memorial Day and how you can take part.