Homophobia, transphobia, and biphobia belong in the trash, let’s work together to bin it 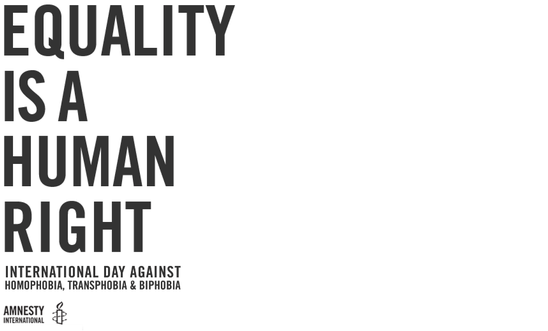 Dr Senthorun Raj is the Secretary of Amnesty UK LGBTI Network and Lecturer in Law at Keele University.

Today marks the International Day Against Homophobia, Transphobia, and Biphobia (IDAHOTB). May 17th commemorates a human rights turning point, when homosexuality was removed from the World Health Organisation’s International Classifications of Disease in 1990.

In the years that have passed since then, lesbian, gay, bisexual, transgender, and intersex (LGBTI) people have become more visible subjects of international human rights concern. Numerous United Nations bodies, resolutions, and forums have urged greater protection of LGBTI people and communities. Yet, over 70 countries continue to criminalise consensual same-sex relationships. Even where criminal laws are vague or non-existent with respect to homosexual activity, countries continue to police and punish individuals who deviate from cultural expectations of being ‘normal’ (such as in the way they dress or express affection in public).

Homo/transphobic violence, however, is not confined to state acts of criminalisation or incarceration. It comes up in moments when someone is bullied as a ‘dyke’ or ‘poof’ in a school, workplace, or aged care facility. It occurs when someone is denied recognition of their gender because of an incorrect ‘M’ or ‘F’ on their birth certificate or erased for being bisexual or faces forced medical ‘normalisation’ because their anatomy is atypical.

As we celebrate how much we have achieved over the years, we must also challenge the bigotry that remains. Here are three things you can do:

Learn more about local differences in LGBTI communities and campaigns.

The LGBTI community is dynamic – it encompasses people with intersecting sexual and gendered experiences who also have different ethnicities, religions, socio-economic statuses, and abilities.

With many countries around the world legalising marriage equality, it is tempting to think that the struggle for justice is (almost) over. Marriage, however, is neither the only nor the most pressing issue for many LGBTI people. LGBTI asylum seekers continue to flee persecution and are denied protection because asylum seekers do not fit their narrow stereotypes about gender and sexuality. In the UK, trans people are pathologised in order to have their gender affirmed. Intersex infants are routinely subject to non-consensual medical procedures to ‘correct’ ambiguities of sex.

A single law reform, no matter how powerful or symbolic, will not eradicate homo/transphobia. In 2015, people washed their Facebook profile pictures in a rainbow tint as marriage equality was made legal in the United States. Yet, in the year following the decision, some US states have passed ‘religious conscience’ laws to enable public and private organisations to discriminate against LGBTI people while other states have pursued ‘bathroom bills’ to prohibit people from using public restroom that do not correspond with the sex they were assigned at birth.

Start a conversation with friends and family about valuing differences.

Activism is not just about challenging homo/transphobia in public spaces – it’s also about ending exclusions in private ones too. Many LGBTI people lack safe homes (or have no form of shelter at all). The experience I’ve had with my family has shown that ‘coming in’, by bringing my personal and political affiliation as a gay man into the home, can help challenge assumptions and create a sense of belonging. This is not always a safe thing to do and no one should feel compelled to disclose their sexuality or gender identity. But, my experience was just as rewarding as being able to bathe myself in glitter and march proudly during Pride in London.

Write or call your local MP.

Whether it’s election season or not, we must ensure that human rights remain at the forefront of political conversations. Take action by advocating to your local politicians that treating LGBTI people equally before the law is a matter of civil rights. For example, you can write to your MP and urge them to pursue policies that promote the wellbeing of LGBTI young people at school, make it easier for people to seek asylum, and allow people to self-identify their gender.

As memes and status updates circulate on social media for IDAHOTB, let’s ensure that the push for LGBTI human rights continues beyond this one day.