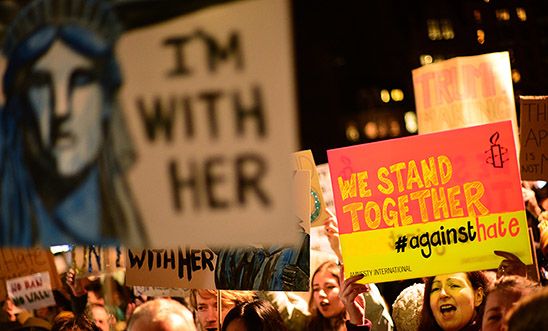 The Trump administration is doubling down on the Muslim ban. The rewrite, expected Wednesday, suggests the administration believes it can tinker with the ban to satisfy legal requirements and blunt public outrage, without conceding defeat. That’s a miscalculation. The opposition will be fierce and, eventually, Congress will be forced to respond.

The new executive order is expected to maintain the ban on people from seven Muslim-majority countries, although individuals with the status of “lawful permanent residents” may be exempted. The earlier order’s mandate to prioritise people facing persecution due to their minority religion — widely read as an attempt to codify a preference for non-Muslim refugees — may also be scrapped. The temporary shutdown of the refugee admissions program may continue, although the specific references to Syrian refugees may be cut. The discriminatory intent of the ban — to treat people as threats based not on what they’ve done, but who they are — will remain.

While the revisions may impact how courts view the order, for the public it’s the optics that matter. And they are the same, if not worse. For people here and around the world, the new ban will inspire the same mixture of scorn and anxiety.

Many will see Trump’s decision to institute a second Muslim ban as symbolic: Of the persistent ascent of mindless fear-mongering and “alternative facts.” That rise was worrisome enough to the public that it led George Orwell’s 1984 to sell out on Amazon late last month. And just as in 1984, the Muslim ban shows a government unmoored from reality. Indeed, a DHS intelligence assessment of the order that leaked on Friday effectively rebutted the premise of the order, finding that citizenship was an “unreliable indicator” of terrorism threats.

It’s no wonder that security officials from both parties — including those who, like former CIA director John Brennan, have their own grisly history of condoning or assisting in human rights violations — are on the record calling the ban counterproductive. The ban has nothing to do with making us safer.

Yet, the Trump administration remains bent on this ban. It persists because it is the brainchild of an extreme and anti-Muslim fringe that is dominating the White House agenda. That isolated fringe seems oblivious to the fact that, no matter the rewording, this new order will still smack of scapegoating. It will send chills across communities that are now or have ever been in the cross-hairs of government.

People will come together again — from LGBT individuals to Asian Americans and Jewish Americans — in a show of solidarity against the ban. They will rightly fear this is another step toward an abyss of inhumanity and bigotry in which they, too, will face systematic government persecution.

Unfortunately, obedient is just what Congress has been. It is stunning that, despite protests at airports and in streets around the country, there is still no bipartisan effort to scrutinise, let alone legislatively kill, the Muslim ban. Homeland Security Secretary John Kelly has still not been called before the Senate to answer for the ban’s impact. Several bills were introduced to nullify the executive order, but no Republicans have signed on to them.

Although several members of Congress spoke out against the Muslim ban, many couched their concern as the chaotic rollout and lack of consultation. They kept quiet about this being a policy that, at its heart, is about guilt by association. They did not stick up for the ideal, however illusory, that this is a country that welcomes the stranger.

Many in Congress would plainly prefer to keep quiet and punt to the courts. They may soon lose that option. If the Trump administration’s lawyers have their way, at least some lower-level courts will greenlight, rather than halt, the revised Muslim ban. That will put the onus on Congress to act, including to legislatively block the ban. Republicans will be reluctant to slap the wrist of the Trump administration, but the more President Trump digs in on this policy of bigotry, the more public pressure individual members of Congress will face to do just that.

And there’s much to be done. Congress should call on DHS officials to explain why they believe this ban is the right use of resources, and whether it is trading off with other, smarter counterterrorism priorities. Congress should also investigate serious allegations about abuses against ordinary travellers caught in the traps of the first Muslim ban order, including people coerced into giving up their green cards. It should also hold hearings on how the Muslim ban is affecting U.S. foreign policy, including the way people around the world view this country and the impact on U.S. strategic interests.

For a year, Trump threatened to bar Muslims from entering the United States. So whatever lofty words Trump may use tomorrow to justify this as something other than a Muslim ban, it won’t matter. One month into the Trump administration, we have already lost the innocence necessary to believe them.