Time for humankind to create a new reality 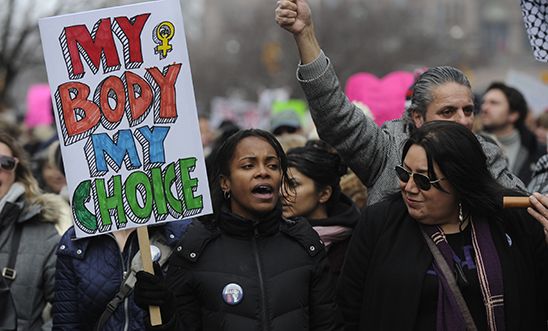 Donald Trump had barely spent a month in the White House when his administration began translating his divisive campaign rhetoric into policy. Targeting people for their faith, his administration issued executive orders banning the entry of citizens from half a dozen Muslim majority countries. At a stroke of a pen, by curbing travel from countries which suffer war and strife and shutting down the US refugee resettlement program, the USA imperiled its storied tradition of welcoming refugees from across the world.

Mercifully, there are those who refuse to capitulate to fear-mongering politicians. Both of Trump's executive orders were suspended by courts, against the backdrop of large demonstrations across the USA. In the Netherlands, more recently, Geert Wilders, another supporter of banning Muslims, was denied a victory at the general elections, though worryingly the ruling party chose to adopt some of his rhetoric.

These developments hint at what's possible when people are not afraid to stand against religious intolerance, but there are no grounds for complacency. In Hungary, Viktor Orban's brand of populism has become increasingly poisonous. After losing an anti-refugee referendum last year, his government is pressing ahead with plans to force mostly Muslim migrants and refugees into container camps, secluded by razor wire, to create ghettos with worrisome echoes in European history.

In Germany, migrants and refugees were subject to more than ten attacks a day on average last year, according to the Interior Ministry. Amid this ugly mood, the German government has come under pressure to ban the full face-veil in public spaces, as other European countries have already done. There are only a few hundred women in each of these countries who wear the niqab or burqa, but by picking on a tiny minority of women, they risk casting difference as a source of danger.

The mostly male ministers who proposed these bans claim they are freeing women from oppression and yet take an approach that is just as authoritarian as banning women from leaving their homes without a niqab or burqa. It is always wrong to tell women how to dress, whether that means forcing them to wear the veil or forcing them to take it off. Governments must ensure that women are not forced to dress according to religious norms by their families or communities, but women who choose to voluntarily wear the veil are not oppressed or in need of liberation, let alone a threat to the public.

In Myanmar, hardline Buddhist nationalists have grown in power and influence. And over recent months the state security forces have subjected its Rohingya minority to what may amount to crimes against humanity. While leader Aung San Suu Kyi does not control the country military, she has failed to condemn the violence, or speak out against intolerance. It is a tragic reminder that no religious community is immune to its own violent forces, and no leader, however distinguished, is immune to their own failures.

Indonesia has rich traditions of religious tolerance, and can draw lessons from places where they are under attack. It is home to the largest number of Muslims in the world, but also a country that officially recognizes six religions. Indonesia has a lively civil society that includes LGBTI rights groups and large pluralistic Muslim organizations. But there is also a troubling history of communal violence in parts of the country and recent developments that cannot be ignored and are tainting the country's tolerant image.

In Aceh, Muslims, Christians and Buddhists have been cruelly caned under Sharia punishments that have come progressively broader in scope. Three people were sentenced to prison terms of between three and five years for having been members of Gafatar, a now disbanded peaceful religious sect. They were convicted of "blasphemy" and "rebellion", vague and discriminatory laws that criminalize the peaceful expression of their rights. Ahmadis continue to be subject to intimidation and discrimination, as is also seen in other countries in Asia, and yet preachers of hate who incite people to violence are tolerated.

Under President Joko "Jokowi" Widodo, the level of communal violence has fallen and the government has made robust statements promoting religious tolerance. That needs to be translated into more action. Lukman Hakim Saifuddin, the Minister of Religious Affairs, told me when I met him last week that the government is intent on carrying out further reforms to strengthen Indonesia's pluralist traditions.

Should it choose to draw on its diversity for strength, Indonesia can become a place where people of all faiths and none are able to live peacefully together at home, and an example to other countries - demonstrating that it is possible to have a world without mutually reinforcing enmities.

As the famous Indonesian writer Pramoedya Ananta Toer once wrote, "humankind is able to create new conditions, a new reality. We are not fated to swim forever among the realities that are here now."