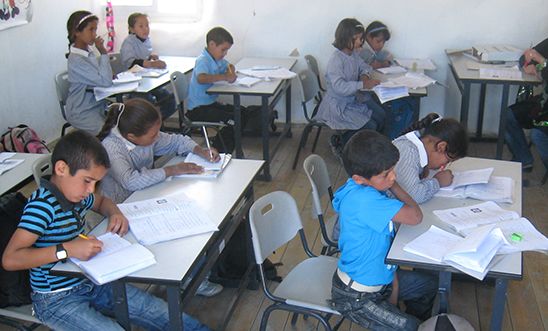 If you’ve been enjoying your summer holidays, then spare a thought for the children of Khan al-Ahmar school in the occupied West Bank. They curtailed their vacation this year – instead they went back to school early to try to prevent the Israeli army destroying it.

In June when I visited the village of Khan al-Ahmar, established by the Jahalin Bedouin tribe more than 60 years ago, those children told me their worst fear was the arrival of Israeli forces to demolish their homes and school. A month later, that fear began to come true.

Khan al-Ahmar is one of 46 Palestinian communities in the West Bank that Israel wants to forcibly transfer to make way for illegal Jewish-only settlements. On 24 May, Israel’s Supreme Court ruled in favour of demolishing the village. And on 4 July, the army forcibly evicted its residents, violently attacking them and solidarity activists ahead of the forced displacement of the entire community.

It was in response to this attack that the villagers took drastic measures. On 16 July, the Palestinian Ministry of Education declared the beginning of the school year for Khan al-Ahmar would start two months early. The students sacrificed their summer holiday in protest against the school’s impending demolition – and in an attempt to protect it from the bulldozers.

Khan al-Ahmar is located east of Jerusalem, near the illegal Israeli settlements of Maale Adumim and Kfar Adumim. Israel’s transfer of its citizens to live in these settlements, along with over 200 others, violates international law and is a war crime.

The first thing you notice as you approach Khan al-Ahmar is that you can’t get there by car. There is no access from the main highway which seamlessly connects the settlement blocs with the rest of Israel.

Instead we had to park our car, cross the highway and jump over a small barrier to get into the village. In addition to being surrounded by Israeli settlements, Khan al-Ahmar also sits next to an Israeli army base and a settlement industrial zone.

For more than six decades, the village’s Jahalin Bedouin community have been struggling to maintain their way of life. Forced from their tribal lands in the Negev/Naqab desert in the 1950s, they have been continually harassed, pressured and resettled by successive Israeli governments seemingly intent on squeezing them out of existence.

The latest Israeli decisions to expand illegal settlements in the area east of Jerusalem, effectively dividing the occupied West Bank in two, will mean further hardships for these communities.

There are 20 such Jahalin Bedouin communities in the area, made up of 2,300 refugees, many of them children.

These communities are located in the area designated as Area C under the Oslo Accords signed in 1993 by Israel and the Palestinian Liberation Organization (PLO). In these areas, which make up more than 60% of the occupied West Bank, the Israeli army retains complete control over the Palestinian population living there. The Israeli Civil Administration, a military body, controls planning and zoning, which prevents Palestinians from building and developing their communities.

Israel’s civil administration has refused to provide Khan al-Ahmar (and other Palestinian communities in Area C) with water, electricity, roads or a sewage system. It blocks construction of homes and has demolished more than 25 homes in Khan al-Ahmar in the past 10 years. The village has more than 160 structures, including a school, a mosque and a clinic, mostly made of corrugated metal and wood.

The Khan al-Ahmar school, which was built in 2009 out of mud and used rubber tyres, serves more than 150 students (aged 6-15 years) from five villages who would otherwise have no access to education.

'Kids have nowhere to play here but at the school. The school is the place where they study, play and enjoy the most,' Abu Khames, the spokesperson of the community, told me while he was taking me around his village.

But all that is set to be destroyed.

Khan al-Ahamr residents should not be left to fight this alone. Raise your voice and take action to stop Israel from forcing thousands of Palestinians off their land, and then illegally using it to create settlements that exclusively house Jewish Israeli settlers.

Israel must immediately scrap plans to forcibly transfer the Jahalin from their land and cancel all demolition orders against their homes. Instead, Israel must transfer responsibility for planning and building policies and regulations in the OPT from the Israeli authorities to the local Palestinian communities.