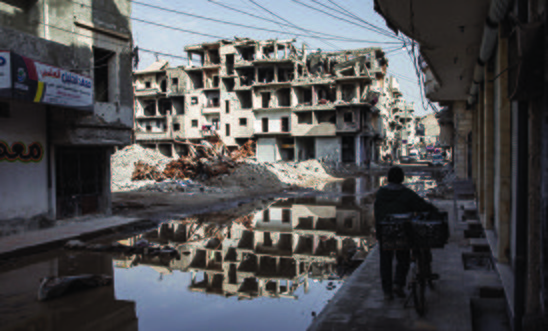 Raqqa, Syria - Mr. Maarbalati sells items out of the back of his bicycle for work. © Andrea DiCenzo/Panos

A Syrian recounts his journey back to Raqqa, a devastated city precariously run by Kurdish forces

Starting in June 2017, the US-led Coalition, including the UK, France and others, launched thousands of air and artillery strikes in support of the Syrian Democratic Forces (SDF), a local Kurdish-led militia fighting ISIS on the ground.

By then, ISIS had ruled Raqqa for almost four years. It had committed war crimes and crimes against humanity, torturing or killing anyone who dared to oppose it.

In its battle against ISIS, the US-led Coalition claims to have taken all necessary measures to spare civilians.

However, that rhetoric is a far cry from reality. Amnesty International carried out extensive investigations on the ground in Raqqa and partnered with Airwars on remote analysis to uncover the military campaign's devastating impact on civilians.

In this moving account, Syrian journalist Marwan Hisham writes about his return to Raqqa – a region braced for yet more conflict and catastrophe.

Marwan Hisham is a Syrian freelance journalist who since 2014 has covered Syria, Iraq, and Turkey. His work has been published in Vanity Fair, The New York Times, The Intercept, and Foreign Policy.

When the Dolmus minibus honked, I jumped out of my sleep and grabbed my shoulder bag as I got out. It was a hot seven in the morning in the Turkish border town of Karakamis. The police had built a structure of fences that narrowed down towards the crossing gate. The distance to the Syrian land was approximately 300 metres. The estimated time to cross for a Syrian was five hours. I was leaving the Turkish Republic for good, not even motivated to look back. I immediately became busy training my brain with quick unsuspicious answers to a wide range of questions by different enemy checkpoints from 'why I was there' to 'why I wasn’t'.

'The Turks, who worry that any sort of Kurdish success is a direct territorial threat to their national security, had found a tool to direct and use in their post-Astana Talks Syria policy: crushing the Syrian Kurdish militants.'

Jarablus, a mainly Turkmen town just on the opposite side of the gate, was captured from the notorious ISIS in 2016 – It’s been since under the Turkish sphere of influence. Only the Euphrates separates it from the SDF territory: a third of the country’s space America and its allies carved for themselves. Exhausted from my 800 kilometre journey all the way from the Turkish capital, and mainly from the last 300 metres of it, I WhatsApp'd my once Raqqa neighbour and hopped into his van. The next 20 hours were mere exploration of one sample of the 'Euphrates Shield' (ES) region the Turks named, a shield against their eternal enemy: the Kurds.

The Turks, who worry that any sort of Kurdish success is a direct territorial threat to their national security, had found in the consumed Arab and Turkmen anti-Assad fighters, a tool to direct and use in their post-Astana Talks Syria policy: crushing the Syrian Kurdish militants.

'A faction of Turkish-formed 'Syrian National Army' demanded money to allow me out of the minibus station.'

The ES region is how Turkey sees northern Syria. Much propaganda effort was put to show how its investments can provide viable alternative to the chaos of the civil war; meanwhile, journalists were denied access.

But Jarablus today is a town mired in misery. It lacked the infrastructure that was often talked about; streets—dark at night—have eroded into dirt. The inhabitants strove hard to get basic stuff; for instance, cool water in the hottest month of the summer. A faction of Turkish-formed 'Syrian National Army' demanded money to allow me out of the minibus station.

'They’re short of salaries these days,' my host said, smiling.

I’d liked to have spent my stop in Jarablus sleeping to restore my strength, if only the fan blades at my host’s rented apartment would move around.

My decision to return was that of being fed up with racism and hostility, a working cooling fan wasn’t what I was seeking after all. In our increasingly-medievalised world of today, it’s not pretty to hail from a weak tribe. 'No matter how harsh, unsafe, or futureless it is in Raqqa, I am going to adapt.' I took the vow.

On the other side (the yellow-painted part of what was 'a' Syria), it felt like another country. The border has hardened, and I had to walk into a familiar-looking crossing, spare the crowd, where I felt the worth of my Raqqa-issued ID for the first time – a traveller with an ID issued from a province outside the current SDF authority would be turned back, unless they had a guarantor. Further ahead in August’s heat, I’ve counted 11 checkpoints within roughly 150 kilometres. SDF recruits (some minor-looking) asked the passengers one by one if they specifically came from Turkey, I answered according to their asking tone. A first-time traveller might be curious about the American patrons: they kept themselves well-hidden spare an aircraft.

They’re too out-of-sight that they’re almost forgotten about.

In Raqqa, I could sense the pre-war normality amongst the ruins. The pace of recovery cannot go unappreciated. It was a new air carrying the memory of my leaving nearly four years earlier, thinking my city was destined for endless fighting with ISIS’ ghosts haunting the region for years to come. Never in my life I thought I’d spend the prime of my youth observing, and studying, alas but rather obsessing with my own town.

My remaining people have been visiting me in dozens and all what they talked about was THE battle.

'Here in that hole you see, a rocket fell.'

'You’ve seen nothing. This whole neighbourhood was locked down for a month and looted room by room.'

But I was more interested in reading the scribbles the fighters left on my late father’s apartment’s walls, of Sawi, Siban, Zaghrus from Qamishlo and Mhsn’s heart taking a direct hit by Bidae’s love arrow on the door’s lacquered wood.

When struck by the pessimistic mood of the talkers, I climbed the roof and watched the skyline; among the lights it was liveliness. Raqqa is back after a long night.

'I’ve never experienced a freer Raqqa than in the last two months: seeing people go about their lives, expressing their allegiances comfortably.'

I’ve never experienced a freer Raqqa than in the last two months: seeing people go about their lives, expressing their allegiances comfortably. The religious, the anti-Assad, the pro-Assad and even the anti-SDF. What the SDF has to do, should it desire to last, I said to myself, is to persuade the war-fatigued residents that it is not just like those several different warring parties that preceded them within a period of only five years in which the city kept switched hands. Indeed, the SDF has a mountain to climb in terms of convincing the population it now governs that it is building for the future.

Sandwiched between Turkey in the north and the Damascus regime in the south, the Kurdish-led group relies largely on the American-led Coalition for protection in facing existential challenges. Now that Trump has just renewed his decision to withdraw from Syria after paving the way for Erdogan and his proxies to invade, Turkey has the door wide open in its quest to eliminate any Kurdish aspirations to have a say in deciding their destiny, and to implement its plan of replacing the Kurds with loyalist Arabs and Turkmen. Similarly, Assad and Iranian and Russian-backed forces have already tried and failed to cross the Euphrates river towards the north when the Americans stopped them. Regime officials don’t conceal their intentions to restore control over North East Syria, 'Sooner or later' they say.

It seems that their chance has come sooner than expected. East of the Euphrates is an area now exposed for the taking; a situation that will be disastrous for Kurds, Syriacs and other minorities in the north, and to Arabs in the south.

As an Arab, I say: when I looked at the Syrian map before today, I saw no hope of an inclusive future except in this part of the country. Now that hope is gone.

Along with Molly Crabapple, Marwan Hisham is the author of ‘Brothers of the Gun – A Memoir of the Syrian War’

In Raqqa, over 1,600 civilians were killed by the US-led Coalition. Please support our researchers on the ground in Syria to continue their investigations