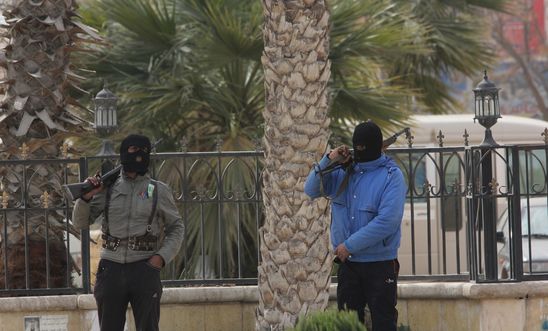 Torture, floggings, and summary killings are rife in secret prisons run by the Islamic State in Iraq and al-Sham (ISIS), the armed group that controls large areas of northern Syria, said Amnesty International in a new briefing today.

“After years in which they were prey to the brutality of the al-Assad regime, the people of al-Raqqa and Aleppo are now suffering under a new form of tyranny imposed on them by ISIS, in which arbitrary detention, torture and executions have become the order of the day.

“Those abducted and detained by ISIS include children as young as eight who are held together with adults in the same cruel and inhuman conditions.

“Flogging anyone, let alone children, is cruel and inhuman, and a gross abuse of human rights. ISIS should cease its use of flogging and other cruel punishments.

“Gulf states that have voiced support for the armed groups fighting against the Syrian government should take action to prevent arms flows, equipment or other support reaching ISIS in view of its appalling human rights record.

“The Turkish government, in particular, should prevent its territory being used by ISIS to bring in arms and recruits to Syria.”

Former detainees of ISIS detention centres describe a shocking catalogue of abuses in which they or others were flogged with rubber generator belts or cables, tortured with electric shocks or forced to adopt a painful stress position known as aqrab (scorpion), in which a detainee’s wrists are secured together over one shoulder.

Some of those held by ISIS have been suspected of theft or other crimes, while others have been accused of alleged “crimes” against Islam - such as smoking cigarettes or zina, sex outside marriage. Others were seized for challenging ISIS’s rule or because they belonged to rival armed groups opposed to the Syrian government. ISIS is also suspected of abducting and detaining foreign nationals, including journalists covering the fighting in Syria.

Several children were among detainees who received severe floggings, according to testimonies obtained by Amnesty. On one occasion, an anguished father had to endure the screams of pain from his 13-year-old son who was being tormented by his captors in a nearby room. Two other detainees related how they witnessed a child of about 14 receive a flogging of around 100 lashes during an interrogation at Sadd al-Ba’ath, an ISIS prison in al-Raqqa governorate. Meanwhile, another child of who ISIS had accused of stealing a motorbike was flogged 30 or 40 times a day for several days.

ISIS forces have summarily “tried” and killed an unknown number of prisoners held at its detention centres. In one case, a former detainee who was held at an unofficial detention centre in the city of al-Raqqa has recounted how, in October, four alleged members of armed groups fighting against ISIS were “sentenced” to death after perfunctory “trials” that lasted barely a minute, then taken away and apparently killed.

Two former detainees who were held at another detention centre told Amnesty that prisoners who had been sentenced to die were usually taken to be executed in public places in al-Raqqa governorate’s towns on Wednesdays and Fridays. It remains unclear how ISIS determines the place at which each summary killing is to be carried out, as prisoners do not appear to be returned to their home area to be put to death or to the scene of their alleged “crimes”.

Several former detainees told Amnesty that they were seized by masked gunmen who took them to undisclosed locations where they were held for periods of up to two months. Some never learnt where they were but Amnesty has identified ISIS prisons at seven locations: Mabna al-Mohafaza, Idarat al-Markabat and al-Mer’ab, all in al-Raqqa city; Sadd al Ba’ath and al-‘Akershi oil facility, both elsewhere in al-Raqqa governorate; and Mashfa al-Atfal and Maqar Ahmed Qaddour in Aleppo.

The Sadd al-Ba’ath prison is beside a dam on the Euphrates River at al-Mansura, where the local Shari’a court judge - who invariably appeared wearing an explosive belt - has instituted a reign of terror over its detainees. Former detainees accuse him of presiding over grotesquely unfair “trials” lasting no more than a few minutes as other detainees look on, and handing down death penalties which are subsequently carried out. At his direction, detainees have been mercilessly flogged; on at least one occasion, he is said to have personally joined in the flogging.

At al-‘Akershi oil facility, which ISIS also appears to use as a military training ground, detainees were subjected to “scorpion” positional torture, according to the testimonies of two men who were held there in recent months. One spent 40 days in solitary confinement, for part of which he was chained up in a tiny room full of electrical equipment with fuel on the floor.

Amnesty is calling on ISIS to end its appalling treatment of detainees and for the group’s leaders to instruct their forces to respect human rights and abide by international humanitarian law. Meanwhile, Amnesty is calling on the international community to take concrete steps to block the flow of arms and other support to ISIS and other armed groups implicated in committing war crimes and other serious human rights abuses.

Amnesty is also renewing its call to the Syrian government to allow unfettered access to Syria by the independent international Commission of Inquiry and by international humanitarian and human rights organisations, and to end its violations of human rights and international law, including the use of torture in its own detention centres.