The legacy of the Suffragettes 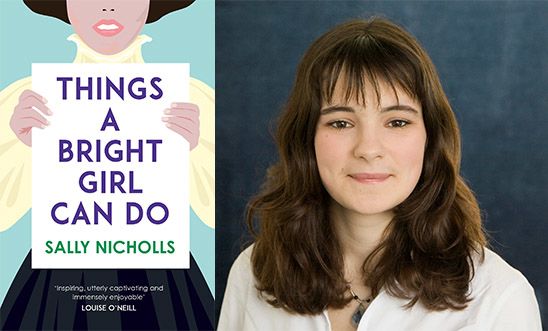 It’s 100 years since the first women in Britain were given the right to vote. Sally Nicholl’s Amnesty-endorsed novel for young adults about young suffrage campaigners meant she researched last century’s movement. Have things changed for those still fighting for equality?

When I started researching my suffrage novel, Things a Bright Girl Can Do, I knew very little about the movement beyond what everyone knows (or thinks they do); Pankhursts, hunger strikes, women smashing windows with toffee hammers borrowed from the back of the kitchen cupboard, and Emily Wilding Davison at the Epsom Derby.

So I began to read the writings of real-life suffragettes and suffragists: suffragists believed debate, petitions and peaceful protest were keys to success; suffragettes took a more militant approach and today it's their name that is more widely used. What struck me was how similar many of their experiences were to modern-day activists.

The suffrage movement didn’t have social media, of course, but like modern campaigners they attended meetings, wrote plays and articles and novels supporting the cause, and went on marches. The description of the big rally my characters attend in Things a Bright Girl Can Do was informed by my own experiences in various marches, including the Women’s March in London in 2017. Like one of my characters, I took my child along, and was delighted to see many other children there. Like many suffrage marches, it was a genuinely joyful affair.

But the movement also suffered police brutality, as many campaigners across the world – and in Britain – still do today. Protest can be a liberating and empowering experience, but it may also be dangerous to mental and physical health. It’s not unusual for modern activists, particularly women, to suffer abuse and even death threats on social media. Poison pen letters and hate mail were common problems for the suffrage movement as well. Like modern feminists, they were typically categorised as frumps, spinsters, manhaters and harridans.

I discovered that their work was not limited to campaigning. My book looks at some of the schemes Sylvia Pankhurst put in place to help East End women, including a cost-price restaurant, a toy factory, a Montessori nursery and an employment agency.

They weren’t alone in this; charitable, unpaid work in Edwardian Britain was the expected duty of many middle- or upper-class women, and a sadly necessary part of many working women’s daily toil. In the days before universal old age pensions, the Welfare State and the Care system, caring for children, the sick and the elderly was usually a woman’s job, as indeed it often still is today. I’ve lost count of the number of women I know who are carers, either full-time or alongside working and raising a family.

The suffragettes were successful in gaining the vote, and in radically widening the opportunities available to women, but the war has not been won. Men are still more likely to earn more than women, despite women outperforming men academically. Women are ten times more likely than men to be stay-at-home parents. And in Britain only three per cent of all reported rapes result in a conviction.

It’s not just women whose rights are under threat. In 2016, the United Nations found that the government’s welfare reforms had led to ‘grave and systematic violations’ of disabled people’s human rights; something that will come as no surprise to anyone who has ever tried to access basic support as or for a disabled person. Ethnic minorities, Jewish people and immigrants have in recent years seen a rise in hate crime across all areas of society. And transgender and homosexual people still face daily discrimination; we do not currently even have equal marriage in all parts of the UK.

At the height of the campaign, Sylvia Pankhurst estimated that there were around 100 suffrage meetings a week. In 1914, the National Union of Women’s Suffrage Societies registered over 100,000 members. Other campaigners were members of organisations such as the Women’s Social and Political Union or the Women’s Freedom League, and many more non-affiliated women marched at rallies, signed petitions and attended public meetings.

I’m thankful every day for the difference they made to the lives of women like me.

Sally Nicholls is a prize-winning author.  Her new book for young adults, Things a Bright Girl Can Do, is about three courageous young suffragettes and has been endorsed by Amnesty.