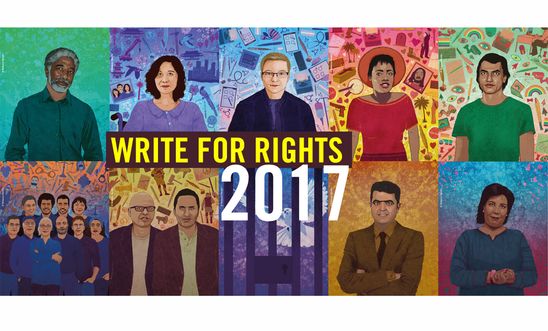 by Patrick Cash, an Amnesty International UK volunteer for the Write for Rights Campaign

Write for Rights is essentially about using freedom of expression to stand up for the freedom of others. It began with simple greeting cards when, in the mid-80s, Amnesty UK had the idea of sending cards to imprisoned human rights defenders around the festive season. The recipients were prisoners of conscience, people under sentence of death, and individuals at risk because of their human rights work. Each card contained a message of solidarity, good will and hope.

Over the years the ‘Greeting Cards campaign’ has developed into Write for Rights, a global project run in over 70 countries. Yet solidarity is still the backbone of why we encourage people to write. Last year, thanks to you, over 152,000 actions were taken, and when this avalanche of letters fell into prison cells around the world, it had a two-fold effect: human rights defenders knew they were supported, and the authorities and prison guards knew that the whole world was watching.

Letter writing has been at the core of Amnesty since its inception. In 1961, lawyer Peter Benenson wrote an article on two Portuguese students jailed for toasting liberty, where he described feelings of impotence at reading about human rights abuses. “Yet if these feelings of disgust could be united into common action,” he said, “something effective could be done.” He would go on to found Amnesty International, where letter writing became the common action.

Write for Rights produces effective change. In last year’s campaign alone, we had three major success stories: Thongpaseuth Keuakoun and Seng-Aloun Phengphanh were released from 20-year prison sentences in Laos in March 2016; criminal charges against Maxima Acuna, a Peruvian peasant farmer defying a gold company, were dropped in May 2017; and Palestinian circus performer Mohammad Abu Sakha was released from an Israeli jail in August 2017.

“From my heart, I would like to thank everybody who took a stand with me: in a word, photo, idea, message or a feeling,” said Mohammed. “Thank you for all the campaigns and efforts to support ending administrative detention.” Similarly, Maxima told us: “I am infinitely grateful that I am not alone… . Keep on supporting, helping, not just me, ok? Because in different areas of Peru there are many women suffering from this kind of ill treatment, all kinds of abuse.”

Write for Rights has also featured in some of the world’s most infamous freedom of speech cases. One of our biggest successes is that of whistle-blower Chelsea Manning, freed by the Obama administration in May 2017, before President Trump’s inauguration. More than 250,000 people had written to request her release. “I wish I had the time and ability to thank each and every one of you for giving me a little bit of joy with each letter and card,” she said.

You helped us during our campaigning for fellow whistle-blower Edward Snowden in 2016,when we handed in a petition of over 1.1 million signatures to the White House, calling on Obama to use the presidential pardon. Although Edward was not pardoned, he said to us:

“With each action, you are authoring a story of how ordinary people, good and gracious, come together in the United States and around the world to change our collective future… It is this same spirit that set free Chelsea Manning.”

A significant and moving victory for Write for Rights was Albert Woodfox. Aged 26, Albert was placed in a tiny Lousiana prison cell, and kept there for 23 hours a day. He finally walked free as a 69-year-old man in February 2016, after more than 240,000 people wrote in his support. Albert described solitary confinement as “punishment without ending”, but that, “your messages from beyond the prison walls have become an enormous source of strength to me.”

The Write for Rights campaign cuts to the heart of Amnesty’s operations. It’s about empathy, and shared humanity. Perhaps one letter may seem just like a drop in the ocean, but the power of any ocean is created only by a multitude of drops. By continuing to galvanize people around the world to write in support of strangers they’ve never met, you can help us achieve something effective. You could even say that writing a letter is lighting a candle, rather than cursing the darkness.

Get started with Write for Rights today.