Indonesia is failing the Ahmadiyya community 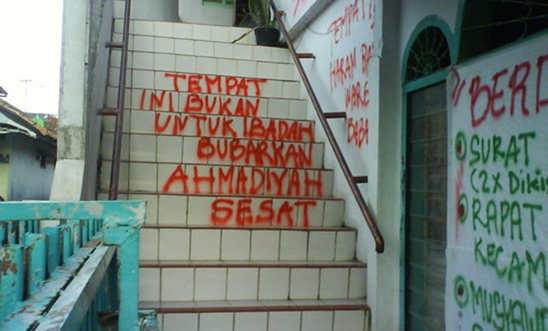 Since 2014, it has been clear that Indonesia is no longer a haven of religious tolerance. Several laws, including the blasphemy law, have come into force which are been used to restrict peoples right of religious expression. Almost all religious minorities, such as the Shi'A and the Christian communities, face harassment, intimidation and the use of the blasphemy laws against their freedom of religion.

One of the community most affected by this is the Ahmadiyya Muslim community. In 2008, the government issued a Joint Ministerial Decree that prohibits the Ahmadiyya from promoting their activities and spreading their teachings. A violation of the decree can lead to a maximum five years in prison. In September 2010, Indonesia’s former Minister of Religion, Suryadharma Ali, called for the Ahmadiyya to be banned. Local authorities have closed a number of Ahmadiyya places of worship including Ciamis (June 2014) in Bekasi (May 2014) and Depok (December 2013).

The Indonesian government must act to guarantee the religious freedom of the Ahmadi community, as well as other religious minorities in the country. They should also ensure that those who have been displaced by the violence committed against them should be offered adequate housing and protection as well as ensuring the preparator's of the crimes are properly  investigated.

Following the passing of the resolution at the AGM in 2017 calling on Amnesty UK to campaign on the prosecution of the Ahmadiyya community. We are asking members to send appeals to the Indonesian Ambassador highlighting the prosecution of Amadiyaa in Indonesia. Please join us in doing this.

calling on Amnesty UK to campaign on the prosecution of the Ahmadiyya community, we