Struggle for self-determination, equality and human rights for all 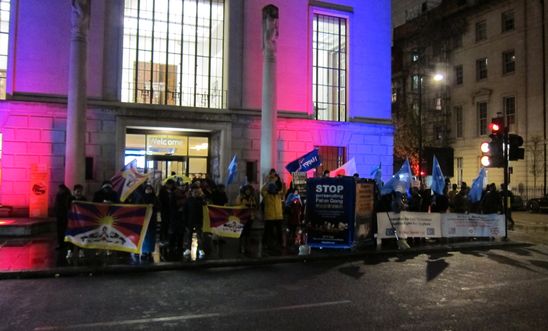 Today we are here to mark the seventy-first anniversary of the Universal Declaration of Human Rights. We are here to oppose the barbaric rule of the Chinese regime and to stand in solidarity with peoples of East Turkestan, Tibet, Hong Kong, and human rights defenders in the Mainland.

Self-determination is a collective right and also the foundation of democracy. Under the CCP rule, Tibetans and Uyghurs have been denied this basic right. Since 2016 over one million Uyghurs and other Turkic Muslims have been sent to concentration camps in Xinjiang. This is a crime against humanity.

This month, Tibetan environmental activist A-Nya Sengdra was sentenced to seven years for promoting clean water and protection of the third pole. Since 2009, at least 163 Tibetans have set fire to themselves in protest against the Chinese Government.

In Hong Kong, two million citizens took to street to protest against the Extradition Bill and to demand universal suffrage. They also deserve the right to self-determination, the right to say no to the Chinese empire, the new coloniser.

In the Mainland, hundreds of workers and students have been detained for promoting labour rights, including the right to form independent trade unions. Human rights lawyers have been cracked down.

Human rights, freedom, and democracy are never granted. We have to fight for them together. Today, we are here to say no to the CCP dictatorship, yes to democracy; no to slavery, yes to freedom; no to the Party-state empire, yes to self-determination, equality and human rights for all.