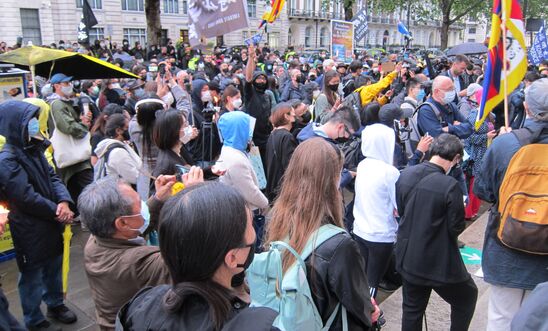 In the evening of 4 June 2021, hundreds of activists gathered in front of the Chinese Embassy in London to mark the 32nd anniversary of the 1989 pro-democracy movement and the Tiananmen massacre.

Wang Chaohua: one of the student organizers in the 1989 pro-democracy movement, who was put on the Chinese government’s list of 21 ‘most wanted’ student leaders after the massacre.

Peter Tatchell: veteran LGBT+ activist and campaigner for all human rights, who was arrested during protests against the Beijing Olympics in 2008.

Rahima Mahmut, a Human Rights activist. She is the UK Project Director of the World Uyghur Congress, Chair of Stop Uyghur Genocide and advisor to the Inter-Parliamentary Alliance on China.

Ma Jian: a dissident writer, whose novel Beijing Coma is described by the Financial Times as ‘an epic yet intimate work that deserves to be recognised and to endure as the great Tiananmen novel’.

David Ball: a socialist activist in the Labour Party, UNISON and the National Education Union, and an organiser of the Uyghur Solidarity Campaign UK.

John Moloney: Assistant General Secretary of the PCS union - a strong supporter of the HKCTU:

Vicky Blake: President of the lecturers’ union the UCU.

Shao Jiang: a witness and survivor of the Tiananmen massacre who was jailed for his involvement in organizing the pro-democracy movement.