The Universal Declaration of Human Rights: Then and Now 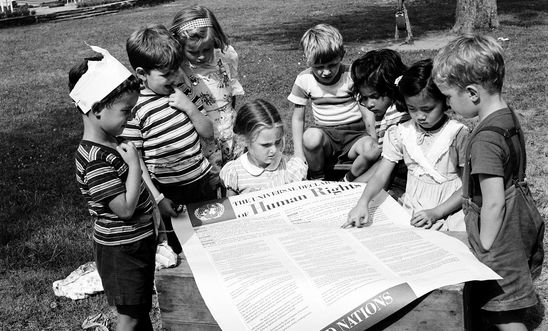 In 1950, on the second anniversary of the adoption of the Universal Declaration of Human Rights, students at the UN International Nursery School in New York viewed a poster of the historic document. © UN Photo

The origins
Theories about human rights have been developing for centuries. Following the horrors of World War II, the United Nations (UN) was founded by 51 countries as an international body dedicated to maintaining international peace. The Universal Declaration of Human Rights (UDHR) was adopted in 1948 by the UN as a response to the war crimes committed during the holocaust.

The Theory
Prior to the UDHR, there were no set rights that protected all individuals globally. Individuals were believed to be the responsibility of the state they reside within and other nations were not encouraged to interfere with domestic affairs of others. The UDHR compromises 30 articles that outlines the basic rights every human should have, irrespective of differences.

The Importance
Although it was not legally binding at the time of adoption, today the UDHR forms the basis of all international human rights law. In the preamble of the UDHR, it is stated that human rights should be the ‘highest aspiration of the common people’ in which we all envisage a world free from ‘tyranny and oppression’ and recognize that ‘all human beings are born free and equal in dignity and rights’. However, since the UN first adopted the charter to the present day, we see individuals experience human rights abuses daily. With the rise of authoritarianism across the globe, discrimination and structural violation of human rights has seen a gradual increase. Educating people of all ages on human rights issues has never seemed to be as important.

How do you incorporate the origins/theory of the UDHR into resources you create?

We all have a right to know our rights – Our human rights can’t be respected, defended or claimed if we don’t know what they are. At the moment, I am writing some education resources for a collection of children’s and young adults books. I start by pulling out the human rights themes that the stories explore, and I might link these to particular articles in the UDHR, followed by questions and activities for deeper exploration. You can see some examples here.

What do you think is the most difficult part of the history/theory of the UDHR to teach?

I think that sometimes the most challenging aspect of the UDHR is the principle of universality. Intellectually, it is simple to understand. But, in reality, the most difficult and richest discussions come from applying that principle…It can be challenging to recognize human rights are not enjoyed universally in our own communities.

What is the most important part of the UDHR to teach?

The UDHR was a remarkable feat of international cooperation. Yet, it wasn’t the birth of human rights. It’s important that we present the creation of the UDHR as a key moment in a long and global history of rights.

Learn more
In partnership with FutureLearn, we have created an online course 'Defending Dignity: The Universal Declaration of Human Rights' which explores ways in which the UDHR empowers you to know, claim and defend your rights. The course starts on 13 April 2020 and is completely free. Join the course for free.