It’s time for politicians to vote for human rights 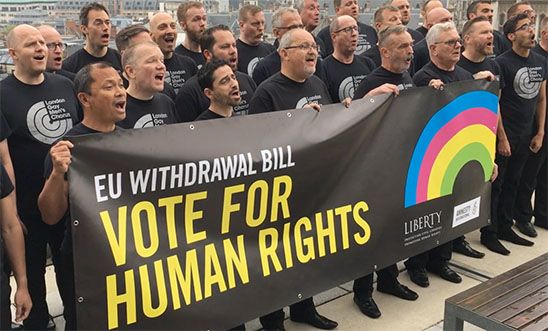 We see daily how the human rights protections we have are used to defend people’s freedom, around the world and in Britain too. To give just one example, they have been used to win equality in pension rights for same sex couples, in a case championed by Liberty and relying on protections that originally came from the EU. But now our ability to enforce those very protections, the ‘General Principles’ as well as our Charter of Fundamental Rights - both shared with other European states – are under threat.

The principle of the present EU Withdrawal Bill is ostensibly to copy and paste EU laws to the UK statute books, to keep continuity in our laws until and unless they are considered at a future date by parliament. So far to the good. But there is a glitch. Squeezed between decisions on the Customs Union and the shape of a ‘meaningful vote’ on the final deal, MPs will also vote on whether to leave behind the human rights laws which have so far played a role in protecting us, even whilst bringing across everything else. It doesn’t have to be this way. There is simply no good reason for treating the Charter differently to the rest of EU law. But there are lots of reasons why doing so is a terrible idea.

For example: to collectively adopt a body of law, whilst cutting out its most vital organ, is to create problems for the proper functioning of that corpus of law here at home. More importantly, according to independent legal advice, it will significantly reduce rights protections. To also take away our ability to enforce the human rights and equality protections in the General Principles is to leave ordinary people without a proper remedy when those are violated. A right without a remedy is no real right at all.

To make matters worse, a system of ‘Delegated Powers’ (the so called ‘Henry VIII’ laws) in the Bill would place unaccountable levels of power in the hands of ministers to make changes to the wording of those copied over EU-derived laws, and any pre-existing domestic laws that have their origin in EU legislation, without proper parliamentary debate. That puts things like the Equality Act and Modern Slavery Act at risk of being watered down by the backdoor should Ministers decide they have good reason to do so. For any of our Human Rights and equality protections to be weakened or put at risk, in the shadow of more headline-grabbing measures, would be a travesty. It’s not what this Bill is supposed to be doing.

But this possible loss is by no means a forgone conclusion. With the leadership of one of Britain’s most respected lawyers and a cross-party mix of heavyweight peers, the House of Lords has voted to return the Bill to the Commons with significant amendments, to reconsider the implications of their suggestions. That specifically includes restoring the right of action on the General Principles, retaining the Charter of Fundamental Rights and placing sensible limits on the Delegated Powers to prevent roll back of rights. The Scottish Parliament too has voted to maintain our present human rights protections. Such decisions strengthen the case for maintaining balance and coherence in the law of the UK.

We are nervous, but we are hopeful that Conservatives will listen to experts in the second chamber. Former Attorney General for the Conservative Party Dominic Grieve QC MP has previously tabled similar amendments on all of these crucial points, though he refrained from pressing them to a vote after the government indicated it was willing to look again at some elements. It did not do so. Labour’s shadow Brexit Minister Keir Starmer QC (himself a former Human Rights lawyer) has made retaining human rights laws one of his party’s ‘red lines’. The SNP, Liberal Democrats, Greens and Plaid Cymru have also all made their commitments clear. More than in or out, more than left or right, human rights and equality protections are universally important. Leaving the EU does not have to mean leaving our Human Rights protections at the border.

Perhaps the biggest problem is that our human rights framework is not sufficiently known and understood, including by many of our representatives. The various protections overlap and apply to different realms. But as is often the case with safety nets we sometimes only notice them when we need them most. As Janet Jackson and Joni Mitchell once sang: “Don’t it always seem to go that you don’t know what you got til its gone?”. This time let’s not let it go. Instead let’s do all we can to press MPs to do the right thing, and to vote for human rights.