If this tank was in your city, you'd want an Arms Trade Treaty

In a couple of hours, Londoners are in for quite a shock. We're going to be taking up a little extra room in the bus lanes with... a 17-tonne armoured tank. Try getting on one of those with a pay-as-you-go Oyster card.

So, I hear you ask, why are we going to drive an armoured killing machine right through central London?

Next week, the world's governments enter talks on the first ever global arms trade treaty - the first set of global rules to control the sale of guns, tanks, aircraft carriers and everything in between. Treaties might not be the stuff of front page news but this is a momentous occasion - it's been over 20 years in the making.

We're going to use the tank to visit 5 key embassies who could be crucial in the negotiations and take the opportunity to remind them the difference they could make.

What you can do to support our day of action

And if you're in London, get a picture of the tank and share it on #armstreaty

Paul Conroy, photographer for The Sunday Times, is here to show his support for the treaty. His recent experiences in Syria left him in no doubt about the need for global regulation of arms. Hear why:

listen to ‘Paul Conroy from The Times on his experiences in Syria, and why we need an #armstreaty’ on Audioboo
(function() { var po = document.createElement("script"); po.type = "text/javascript"; po.async = true; po.src = "http://d15mj6e6qmt1na.cloudfront.net/assets/embed.js"; var s = document.getElementsByTagName("script")[0]; s.parentNode.insertBefore(po, s); })();

In London? Keep an eye out for this tank, we're getting ready to demand a bulletproof #armstreaty www2.amnesty.org.uk/blogs/campaign…yfrog.com/nwzi7osj

First stop, Parliament Square, to remind the UK Government they’ve got to keep strong in the negotiations. Foreign Office Minister Alistair Burt has made a good statement confirming the UK want a strong treaty with human rights at its core, but we need to keep the pressure up and what better way than with an armed vehicle.

You can do the same with a signature – sign our petition here.

While we're outside Parliament in this vehicle, some of our colleagues are inside Westminster, asking MPs to publicly support the treaty.

Does your MP support a strong and effective Arms Trade Treaty? We've compiled responses from MPs across the UK - have a look and see if your MP is on the list.

As we head up The Strand, here's some background on why we're driving a tank round London. A global arms treaty has the potential to curtail a huge number of human rights abuses - 60% of the reports Amnesty writes include the use of weapons. In the last year alone we've reported on tanks being used to shell civilians in Libya, Syria and South Sudan. A tank driving round London is a twitpic opportunity. If you're in Damascus, it's time to turn and run. 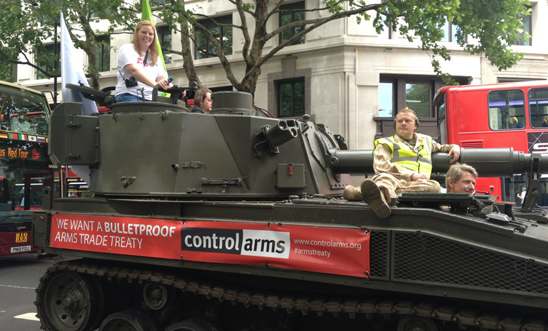 We've just delivered our letter to the High Commission of India. They're one of the big, emerging exporters but they're skeptical of some of the key points we want in the treaty.

Notably, their submission to the negotiations doesn't explicitly mention human rights, and they don't want parts and components included.

We're doubling back on the Strand to the South African High Commission. South Africa is another key exporter of arms – the biggest in Africa.

Although they're supportive of the global arms treaty negotiations, their record isn't clean: in 2008, they issued a license to a a Chinese 'Ship of Shame', carrying ammunition bound for Zimbabwe. That shipment was only stopped when dockers refused to unload it, sparking a campaign by charities and NGOs to turn the ship round. Just one example of many of why human rights-based rules are needed to govern shipments. 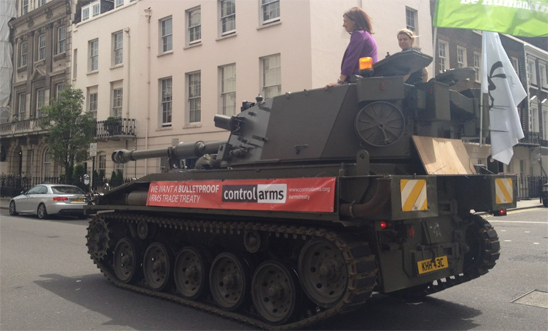 The US Embassy is next on our list. They’re one of the most influential states but they don’t want ammunition in the Arms Treaty despite having rigorous controls themselves.

But most worrying, the US wants a treaty that only requires each state to ‘take into account’ factors such as human rights, rather than obliging a country to stop an arms transfer if evidence exists that the weapons would be used for serious human rights violations. ‘Taking into account’ leave the door wide open for unscrupulous states to keep arming dictators with no recourse. You can help us put pressure on the US by signing our global petition.

We've dropped our letter into the Brazilian Embassy and are on our way to visit the Kenyan's, via BBC Broadcasting House. Brazil's President Lula was one of the first to support an Arms Treaty but they've not been vocal enough since then, and we need them to step up to the plate!

One thing's for certain, we're turning heads as we take this tank through London. Everywhere we've passed the cameras have stopped snapping the sights, and have snapped the arms treaty tank instead. Good thing we put the hashtag (#armstreaty) on the side...

We're at the Kenyan Embassy. Kenya is a key player in these negotiations - in fact, the Kenyan government was one of the original authors of the 2006 UN resolution which started this process.

But it's made some crucial errors. In 2008, Kenya knowingly permitted Ukrainian ships loaded with tanks and bound for South Sudan to stop at its ports - extremely worrying, given the current instability in Sudan.

The tank has long gone back to it's owners but our day of action is only just coming to an end.

Campaigners Olly and Verity, our Director Kate Allen and Oxfam's Anna McDonald have just handed over 17,000 petition signatures to No. 10 Downing Street demanding a bulletproof arms treaty. You can still take action though - sign our global petition which goes to Ban Ki-Moon, or email your MP and remind them they can keep pressure on the UK government.

Our work in London has been just part of a global day of action - our friends at Amnesty USA are just getting started with their action in Times Square - follow the action on the #armstreaty tag on Twitter.

And although the excitement is over when it comes to driving tanks round London, next month gets really interesting as the treaty negotiations start.

If it looks like states are trying to get key parts of the treaty removed, such as the obligations to respect human rights law, then we'll need your help. Subscribe to this blog, follow us on Twitter, or like us on Facebook to make sure you're ready if we need you.

Together we can make history next month. Now that's more exciting than driving a tank.