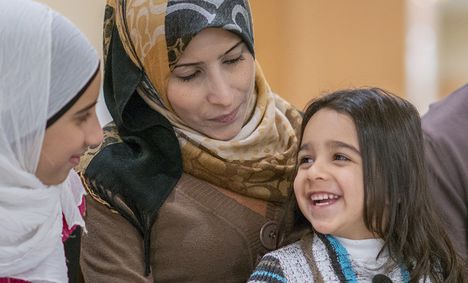 Everyday family life is full of wonderful moments. But some families are being forced apart.

Home Office rules separating child refugees from their parents aren’t just restrictive - they’re deeply unfair. But the Home Secretary has the opportunity to change this.

Will you join thousands of others in asking her to do the right thing?

Everyday family life is full of wonderful moments. But some families are being forced apart.

Home Office rules separating child refugees from their parents aren’t just restrictive - they’re deeply unfair. But the Home Secretary has the opportunity to change this.

Will you join thousands of others in asking her to do the right thing?

For many thousands of refugees in the UK, safety from conflict has come at a heavy price. The UK government’s strict and unfair rules have forced apart mums and dads from their children, sisters from brothers, and elderly parents left behind to fend for themselves.

They may have reached safety but instead of feeling relief, the agony and guilt of separation from loved ones bares down on them. Inevitably, people are left feeling isolated, traumatised and alone as they grapple with a new language and try to find their feet in a foreign country - with minimal support.

One couple were told by a UK judge they could receive protection in the UK, but they would have to leave behind two of their four children in war torn Libya, because they were over 18.

Another couple from Homs, Syria now living in Abergavenny, are desperate to be reunited with their daughter, who is now living on the streets in Lebanon with her then five-year-old son.

One 15-year-old, who escaped to the UK after being recruited by the Syrian army worked in McDonalds to raise the $3000 it would cost for his mother to make the dangerous journey to join him; as he had no legal alternative due to his age.

Current UK laws governing the rights of refugees are restrictive and unfair. They deny child refugees the right to bring their parents to the UK; they mean that parents have to leave behind their children even if they have only just turned 18; and they mean that elderly parents are left behind in war torn countries to fend for themselves.

In 2018, MPs packed out Westminster to support a Bill introduced by Angus MacNeil MP proposing the necessary changes to bring more refugee families together. Thanks to many thousands of people like you writing to your MPs, the Bill passed with an overwhelming majority with 131 MPs voting in favour from all sides of the political spectrum.

But now we need the government to listen to these MPs and also support these changes. The new Home Secretary, Priti Patel has the power to do this with the strike of a pen. Please sign our petition urging her to reunite more refugee families.

With your help we're calling for the following changes to the current rules:

We are proud to be running our Families Together campaign in partnership with Oxfam, UNHCR, Refugee Council, British Red Cross, STAR (Student Action for Refugees) and others to call on our government to change the rules that keep refugee families apart.

Helping mothers, fathers, brothers and sisters who have been torn apart, lost everything and experienced so much, is the right thing to do. Please join us by calling on the Home Secretary to show true leadership and allow refugee families to reunite and rebuild their lives together in the UK.

As if fleeing conflict and persecution wasn’t enough. For child refugees in the UK, safety can come at a heavy price. Our new report ‘Without my family’ highlights the devastating impact on children who have already experienced so much.

Along with Refugee Council and Save the Children, the report exposes the impact on child refugees living in the UK of being separated from their families.The children we spoke to told us how the government's policy of keeping families apart caused them constant anxiety, fear for the safety of their parents and siblings and in some cases serious damage to their mental health.

The UK governments refusal to guarantee a child's right to family reunification is in breach of its international obligations under the UN Convention on the Rights of the Child. The arguments the governments put forward in denying these rights revolve around an unfounded fear of encouraging dangerous journeys by more asylum seeking children. Nothing in this research, or wider research into the issue supports this contention.The children we spoke to invite the government to imagine themselves or their families in a similar situation.