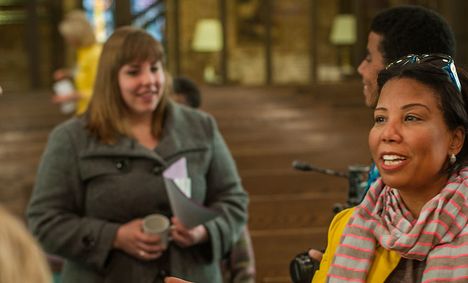 Azza Soliman is a women’s rights defender who has been persecuted by the Egyptian government for almost 30 years. Her crime? Simply fighting for the basic human rights of Egyptian women.

She faces years in prison on dubious charges. Her freedom is severely limited by an asset freeze and travel ban.

Tell President al-Sisi that he must drop these charges and restore Azza’s freedom immediately.

Azza Soliman is a women’s rights defender who has been persecuted by the Egyptian government for almost 30 years. Her crime? Simply fighting for the basic human rights of Egyptian women.

She faces years in prison on dubious charges. Her freedom is severely limited by an asset freeze and travel ban.

Tell President al-Sisi that he must drop these charges and restore Azza’s freedom immediately.

“This Azza Soliman only brings trouble… She is the epitome of ignorance... We should beat you to wake you up.”
— Hatem Naaman, LTC News

Imagine a UK mainstream news presenter saying something like this. Their career would be over. They might even be sent to prison.

Azza Soliman has been under attack by the Egyptian government for 30 years. Her crime? Simply standing up for basic women’s rights.

Azza has been one of the most prominent women’s rights defenders in Egypt since the 80s. Her organisation the Centre for Egyptian Women Legal Assistance (CEWLA), set up in 1995, campaigns for legal equality of Egyptian women.

Across the world women’s rights defenders like Azza face threats, harassment, smear campaigns and sexual abuse just because they're women who speak out. They're targeted not only because of their activism, but because of their gender, hoping this will silence any criticism.

Sadly, this kind of intimidation is nothing new to Azza. Since 1988, because of her courageous work, Azza has been accused variously of spying and being a ‘threat to national security’, put under surveillance, targeted by smear campaigns, and harassed by security forces and pro-government media outlets.

She now faces years in prison on dubious accusations of:

We believe that these charges are politically motivated, part of a wider crackdown on rights groups in Egypt.

Azza’s freedom is under attack, with an assets freeze and travel ban preventing her from travelling outside Egypt until her trial.

She is not a criminal

Azza is the victim of a cynical crackdown on human rights in Egypt, part of a desperate attempt by President al-Sisi’s military regime to hold onto power.

She has done nothing wrong. The charges against her and other human rights defenders in the country hold no merit.

When the people of Egypt overthrew their totalitarian government in January 2011 they hoped to finally build a fair and democratic country.

Seven years on and unfortunately they are still waiting.

Far from taking his country forward, President al-Sisi’s military regime has presided over a crackdown against his opposition, leading to horrendous massacres, high profile assassinations, thousands of political prisoners and hundreds of disappearances.

The country is left with a failing economy and no viable opposition to help bring change.

Since 2011 rights groups have been silenced across Egypt by the “foreign funding case” also known as Case 173.

In June 2013, 43 foreign and Egyptian rights workers were sentenced to prison terms of between one and five years and a series of international NGOs were shut down, including Freedom House and the International Centre for Journalists.

Pressure has ramped up in the past year with judges using arbitrary travel bans, arrests, and asset freezes to destroy any opposition to the ruling regime. Azza Soliman is just one of the victims.

In May 2017 a new law was passed that severely limits human rights work, described as a “death warrant” for rights groups.

The law bans domestic and foreign groups from engaging in rights work or anything that can be said to harm national security, public order, public morals or public health. Read: ‘anything the government disagrees with’.

Foreign rights groups are made to pay up £12,000 to start up, and anyone breaking the new laws faces fines of more than £40,000 and up to five years in prison.