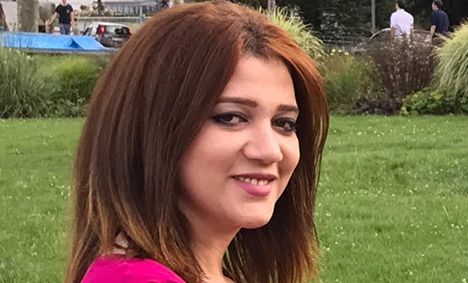 Women's rights activist Amal Fathy has been jailed in Egypt for posting about her experience of sexual harassment on Facebook.

Detained since May, Amal was sentenced to two years in prison on 29 September. An Egyptian court ordered her release on probation on 19 December, but she has yet to be freed.

On 9 February 2019, Amal Fathy's probational terms were modified. Her house arrest was lifted, but she now has to report to a police station for four hours twice a week. Previously, she had to report to a police station only once a week for one hour. Amal Fathy could still be arrested at any time, as an Egyptian court had upheld the two-year prison sentence against her on 30 December 2018.

Critical of the Egyptian government

We need your voice

We are extremely concerned that Amal could be kept in indefinite pre-trial detention for months or even years.

We need you to raise your voice and call for all charges against Amal to be dropped and for her to be released immediately.

*6 April Youth Movement is a youth activism movement that was central in the protests that led to ousting former President Hosni Mubarak back in 2011.

Amal's health is suffering – she currently can't walk without assistance and is having difficulty sleeping. She has not given proper medication. Instead, she has been told by the prison doctor to stop "acting".

On 19 December an Egyptian court ordered Amal's release on probation with the proviso that she visit a police station a number of times every week. Her next hearing in this case is scheduled for December 26.

The Egyptian authorities have a history of arresting activists, journalists, human rights defenders, and even social media figures over speech related offenses. In at least five different cases, Egyptian authorities have been holding them in pre-trial detention pending investigation over charges of ‘disseminating false news’, ‘misuse of social telecommunication tool’, and ‘belonging to a banned group’.

These charges are usually supported only through national security agency’s investigations, and when evidence is found it is usually in the form of Facebook or Twitter posts.

Along with Amal Fathy, there are at least four more individuals, including a video producer, former politician from the liberal Dostour party, a blogger, and a 6 April Youth movement member.

6 April Youth Movement is a youth activism movement that was central in the protests that led to ousting former President Hosni Mubarak back in 2011. Since 2013, the Egyptian authorities have been targeting its leadership with arrests and punitive probation measures.

ECRF staff members have been frequent targets of government harassment since its founding in 2014. In June 2015, Mohamed Lotfy was prevented from boarding a flight to Germany and the authorities confiscated his passport, without giving a clear reason.

He was not issued with another passport for two years. The Egyptian authorities also arrested the board director of ECRF,  Ahmed Abdallah, and Minorities program director, Mina Thabet, from their homes on 25 April and 19 May 2016 respectively.

Prosecutors charged them with ‘membership in an illegal organisation’ and with ‘attempting to overthrow the government’. Egyptian authorities released Mina Thabet on 20 June and Ahmed Abdallah on 10 September 2016 – both were released on bail.

Enforced disappearances on the rise

ECRF is well known for its work on the case of the Cambridge University student Giulio Regeni, who was abducted and killed in Egypt a year ago while doing research in the country.

The 28-year-old Giulio Regeni went missing on 25 January 2016, while conducting research in Cairo for his PhD on trade unions. His badly mutilated body was found in a ditch on the outskirts of Cairo on 3 February 2016.