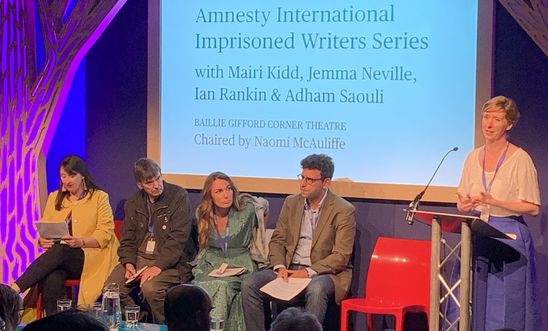 Imprisoned Writers: Autocratic for the People

In 2018, the Universal Declaration of Human Rights turned 70. And yet, it is abundantly clear that none of us can take any of our human rights for granted. We certainly cannot take for granted that we will be free to gather together in protest or to criticise our governments.

Assaults on the basic values underpinning human rights – which recognise the dignity and equality of all people – have assumed vast proportions. Conflicts, fuelled by the international arms trade, continue to exact a cataclysmic toll on civilians, often by design.

Leaders of wealthy countries have continued to approach the global refugee crisis with a blend of evasion and outright callousness, regarding refugees not as human beings with rights but as problems to be deflected.

This is a moment to reclaim the essential idea of the equality and dignity of all people, to cherish those values, and demand that they become a foundation for policy-making and practice. The artificial boundaries erected by a politics of demonisation lead us only towards conflict and brutality, a nightmarish vision of humanity governed by naked self-interest and blinded to the plight of others.

Too many leaders in the world have allowed the exponents of vilification to set the agenda and failed to articulate an alternative vision. It is time for this to change. We must refuse to accept narratives of demonisation and build instead a culture of solidarity. We must hone our capacity for generosity towards others. We must assert the right of all people to participate in building the societies to which they belong. And we must seek constructive answers – rooted in human rights – to the frustrations, anger and alienation that provide a ready context for toxic political narratives of blame.

Today’s readings reflect on this global crisis of democracy.

Imprisoned in a maximum-security jail since November 2016, Selahattin Demirtaş continues to advocate for the people of Turkey as an author and a politician. He wrote and published Seher (Dawn) in 2017 and ran for President in 2018, both from behind bars. From 2014 to 2018 he was the co-leader of the People’s Democratic Party (HDP), a left-wing pro-Kurdish party with an emphasis on progressive values, feminism, and LGBTQ rights.

Russian-American journalist Masha Gessen is the author of ten books, including The Future Is History: How Totalitarianism Reclaimed Russia, which won the National Book Award in 2017. She writes about Russia, autocracy, LGBTI rights, Vladimir Putin, and Donald Trump. Moscow born, she moved to New York with her partner and their children in 2013 when Russian authorities began to talk about taking children away from gay parents. Today's reading, Autocracy: Rules for Survival, was published in the New York Review of Books.

Jamal Khashoggi was a Saudi Arabian dissident journalist who fled the kingdom in 2017 and lived in self-imposed exile. He wrote columns critical of the regime for The Washington Post and was named Time magazine’s person of the year in 2018 along with other journalists who faced political persecution for their work. On 2 October 2018 he entered the Saudi consulate and didn’t come out alive. The column being read today, Saudi Arabia's Crown Prince is acting like Putin, was published in the Washington Post in November 2017.

Valquira submitted her testimony to Amnesty International in March 2019, documenting her confinement in an immigration jail in Texas and subsequent separation from her 7-year-old son.

Email Immigration and Customs Enforcement Director, Mark Moore, calling on him to urgently reunite Valquiria with her son.