Inside Yarmouk: Life under siege 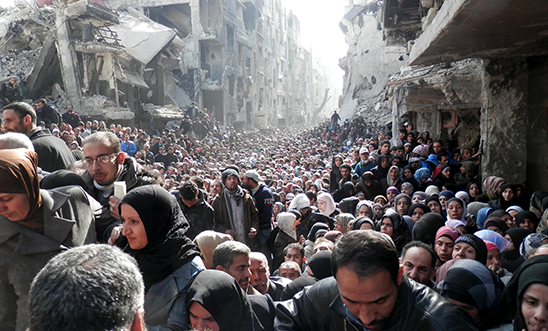 Three years since the uprising in Syria began, ordinary civilians are being intentionally starved to death. Besieged by the Syrian government and armed opposition groups, some have been reduced to eating cats.

Yarmouk is a highly built up area of about two square kilometres on the south side of Damascus. Yarmouk was home to about 180,000 Palestinian refugees and several hundred thousand Syrians.

The siege of Yarmouk by government forces began in December 2012 and since July 2013, except for a few occasions, the Syrian army has prevented the entry of all people, food and goods. Today 17,000 to 20,000 people remain trapped in Yarmouk.

Yarmouk's civilians have been brought to the brink of starvation, forced to forage for food.

Between July 2013 and up to 25 February 2014 we have recorded the deaths of 194 people, including 12 babies, six children and 41 elderly people. Two-thirds have died of starvation.

At first, when flour ran out, they used lentils and then bulgur wheat to bake alternatives. When these ran out or became too expensive they survived by scavenging for anything that might be edible including cactus and dandelion leaves.

'I eat anything I can get my hands on. I eat on average one meal every 30 hours. Either we have to go to the small field areas overlooked by snipers, looking for herbs, or group together to buy a kilo of rice or lentils at 10,000 Syrian pounds (£41) and cook it, but we cannot afford to do this each day due to the cost.'
A Yamouk resident

We have recorded at least two people being killed by government snipers while foraging for food in the small fields adjacent to Yarmouk.

A hospital nurse told us of a teenager who had been shot dead while collecting leaves to eat. Addressing the lifeless boy, his grieving father said: 'You died for the sake of brining hibiscus leaves for your brothers and sisters.'

Recently a young girl was taken to hospital suffering from stomach problems after her family had killed and eaten a dog.

Urgently in need of healthcare

Of the 194 deaths we have recorded, 51 died because of a lack of medical care.

Hospitals and other medical facilities have been particularly badly hit and medics have been targeted.

'As soon as I arrived [at Palestine Hospital] a health worker told me that my husband hadn't made it. There were no doctors at the hospital because a few days earlier, Dr Aladdin Youssef was arrested and so others were scared to come to the hospital.'
Widow of Ghassan Shihabi

Today, after being besieged for months, no surgeons remain at Palestine Hospital. A medical worker told us: 'any necessary surgery is carried out by nurses who are learning by experience and study.'

In December 2013 and January 2014 three women and five newborn babies died because the hospital was unable to give them the medical treatment they needed. People we have spoken to have told us that the elderly and babies are suffering the most.

'Babies are dying because there is no milk, neither powder nor from their own mothers.'
A medical worker

150 people have been arrested by government forces since April 2011 including 12 medics. However according to local activists the real number could be in the thousands. All our sources insist the majority were civilians.

On 2 February 2014, 27 people were arrested as they went to collect food from an army checkpoint. We don't know what has happened to them.

On 3 February 2014, Mahmoud Mou'ad, a humanitarian aid worker, was seized by forces loyal to the Syrian government. The authorities have provided no information about him since he was detained.

The residents of Yarmouk are not alone. Their stories are repeated across the country. Around 250,000 civilians are living under siege in Syria. World leaders must act to ensure immediate humanitarian access to end the suffering of ordinary civilians who have been caught up in the conflict.

Downloads
Squeezing the life out of Yarmouk: War crimes against besieged civilians
Briefing note on sieges across Syria - 16 April 2014