Women in Iran could be turned into baby-making machines 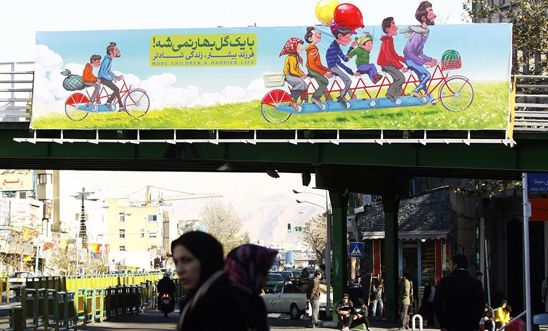 Billboard inTehran promoting large families. Banner reads 'Spring will not arrive with one flower', where flowers are children © IRNA

Iran has promoted sexual education and choice in recent years – but that could be about to change.

There are two Bills making their way through Iran’s parliament at present. If they become law, every woman and girl in Iran faces serious repercussions on her everyday life. She will be denied choice and autonomy over her own body, and valued primarily for her womb.

The Bills infringe on a woman’s right to equality and privacy, as well as numerous rights to reproductive health.

The Comprehensive Population and Exaltation of Family Bill (Bill 315)

If Bill 315 becomes law, women and girls will be:

If Bill 446 becomes law, women and girls will be:

Between 1993 and 2012 people in Iran were provided with access to sexual and reproductive health services and information through the Family and Population Planning Programme.

It ensured free condoms and other affordable contraception was available. There were clinics in cities and rural health houses, staffed by community health workers. Universities made family planning courses compulsory for undergraduates and it was included in adult literacy programmes.

Then, three years ago, the Supreme Council of the Cultural Revolution adopted a binding resolution calling for its abolition and funding for this programme has now been completely eliminated.

Our campaign to stop the Bills

Over 14,000 of you emailed the Iranian authorities through our website in April and May 2015. So far, the Bills have not progressed but we are keeping a close eye on developments.

For details of the Bills and our research on the issue, download the report below.

Downloads
Report - You shall procreate: Attacks on women's sexual and reproductive rights in Iran