Why I'm a Guilty Feminist 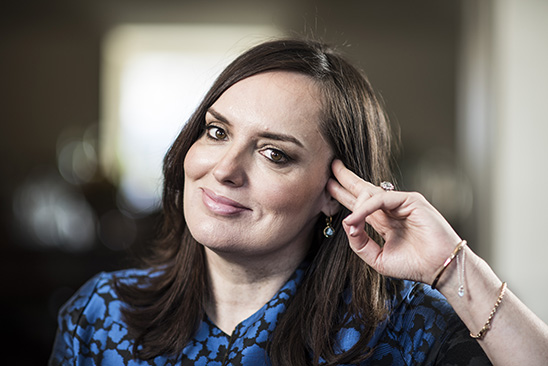 Amnesty Ambassador Deborah Frances-White uses comedy to challenge issues facing women and the world today. She talks about her award-winning podcast, refugee work and the realities of being a feminist.

We recently worked together on a live podcast!
Listen now to The Secret Policeman's Podcast LIVE!

‘I had a very happy childhood until my family became Jehovah’s Witnesses when I was 14. That had a big impact on how I was able to live.’ It proved to be an early seminal moment for comedian and writer Deborah Frances-White who says she was brainwashed but still felt the inequality.

‘That’s the reason why I’m a feminist. I was in a patriarchy that was extremely controlling and exclusively run by men. They decided what was right, and what was wrong. There was a lot of misuse of power; women were never asked to contribute. So when I was able to break free from that, I said: Right, I’m going to live in a world where women fight for rights.’

The outside world wasn’t much better, she says: ‘I was always looking to change the architecture and create female-led spaces. It just took me a long time to find myself and the strength to do it.’

Born in Australia, Deborah escaped the religion by going on a ‘gap year’ to London. She worked as an interpreter in sign language and Japanese, read English at Oxford University, then turned to stand-up comedy.

Today, millions of fans are hooked on her weekly podcast The Guilty Feminist. The podcast began in December 2015 ‘when we all got angrier about the way women were treated’.

Hillary Clinton was running for president. Bill Cosby’s accusers appeared on the cover of New York Magazine in a stunning statement of unity. ‘Yet he was still walking around. I felt there was something in the air. When I met friends for lunch, we talked about feminism and our place in the world rather than our love lives or careers.’

The podcast is a live panel discussion with guest comedians and celebrities in front of an audience. ‘It feels like a supportive club,’ she says. They discuss the noble goals of feminism, while admitting to doing or saying paradoxical things.

For the Edinburgh Festival Fringe, Deborah assembled an impressive line-up of comics to raise awareness and funds for Amnesty with two exclusive Secret Policeman’s Podcasts. The live shows highlight the Families Together campaign and the case of Nazanin Zaghari-Ratcliffe, imprisoned in Iran. The first episode is available to stream below.

‘Each episode starts with “I’m a feminist but…” For instance: “I’m a feminist but… once I went on a women’s rights march, and I popped into a department store to use the loo, and while I was there I got distracted trying out face cream, and when I came out the march was gone.” We acknowledge these hypocrisies but also understand that just because we’re not perfect, doesn’t mean we can’t be a force for meaningful change.

‘Women have been socialised to have issues of confidence and constant concerns of “are we doing this right?”. Feminism can be just another thing to feel guilty about. This podcast is the antidote. Let’s laugh at our insecurities but let’s also strengthen ourselves and recognise that we are often pretty brave.’

Topics range widely - mental health, exercise, sexual assault, male privilege, identity politics, refugees, hope, crying… and being brave. It’s clever and confessional, frank and funny. Nothing is off-limits. ‘My way of making themes on-limits is to invite a broad section of people. I prefer majority representation because I learn so much more. Trans jokes can be made but if you’ve got no experience of being trans, then let trans people make them.’

The podcast has had a staggering 50 million downloads (and growing).

Is she surprised by its success?

‘Yes, very. But I understand it because women are thirsty. There’s not much aimed at women by women for women.’ Humour helps. You can change things if you’re honest in comedy. ‘Our armour comes down. If we all laugh and say, yes we’re failing in this or not doing enough, there’s a group acknowledgement. Collectively we can change it.’

Deborah lives with her husband — ‘a massive feminist’ — and Steve Ali, a Syrian refugee, who inspired her involvement with Help Refugees, a grassroots organisation that supports refugees in Calais and Greece. ‘I met Steve on a podcast where we invited refugees to talk about their experiences and expertise. Refugees are a million different people. After the show Steve told me he lived in the Calais Jungle; he’d built a lot of it and was a firefighter in the camp. I asked him to mind my cats while we went on holiday. After we got back it became clear that if Steve left one of my cats would go with him. Now we’ve become like family.’

In Calais she has interviewed volunteers for a podcast and put together a Guilty Feminist fundraiser, Comics for Calais. More shows are in the pipeline to bring energy and hope to an area that has been forgotten since the Jungle was destroyed, she says. ‘Seeing the French military police steal and destroy refugees’ tents so they won’t stay there is awful.’ What’s the answer? ‘If everyone got to know one refugee. If they looked out for them or gave supplies, or got them to a safe haven, the crisis would be over. And more refugees telling their stories. That’s what will change people, that’s when you’re moved.’

This is a shortened version of the interview published in Amnesty Magazine, issue 198. To receive your free copy every quarter with the latest news and opinion about human rights become a member today for only £3 a month. Join Amnesty.

‘The Guilty Feminist book by Deborah Frances-White published by Virago is available now in bookshops.