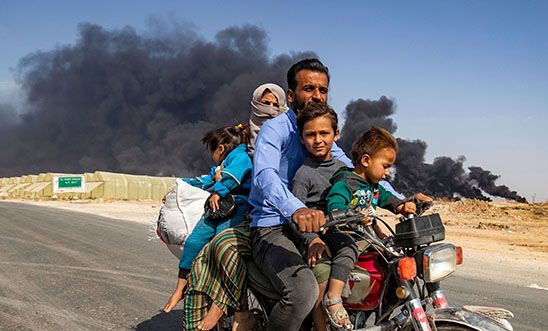 March 15 2020 is a significant day for Syrians. It marks the 9th anniversary of mass uprisings across the country when hundreds and thousands rose up to demand a better life.. The Syrian authorities responded with extreme violence and nine years on, civilians are still to see justice for the many atrocities committed.

These war crimes & crimes against humanity must not be forgotten, nor go unpunished. Victims and their families have the right to truth, reparations and justice – and Amnesty UK will do everything it can to ensure this happens.

Syrian government forces, with the support of Russia, have repeatedly attacked civilians in north-western Syria. This included artillery shelling and air strikes, killing and injuring thousands of civilians, including rescue or medical workers and displacing hundreds and thousands, the majority of which are women and children.

According to local monitors, Syrian forces arbitrarily detained and forcibly disappeared civilians in areas under the control of the government, especially Daraa and Eastern Ghouta in Damascus Countryside governorate. Those detained included former fighters who had reconciled with the government, family members of armed group commanders, humanitarian workers and families of activists displaced to north-west Syria. Often they would be subjected to torture, with some cases dying whilst being detained.

Civilians remain disappeared, the majority since 2011. Families of the disappeared have endured emotional and psychological consequences of living with the uncertainty of what had happened to their loved ones. Syrian security forces also continued to hold thousands of detainees arrested in previous years without trial, often in conditions that amounted to war crimes.