Greek authorities intend to close the open, self-organised refugee shelter PIKPA on 15 October. PIKPA has been operating in Lesvos since 2012, hosting and assisting thousands of refugees and asylum-seekers among the most vulnerable. Greek authorities must revoke the decision to close PIKPA, let the organization operate freely, protect its around 100 residents, and ensure and promote open and safe spaces for asylum-seekers and refugees in Greece. 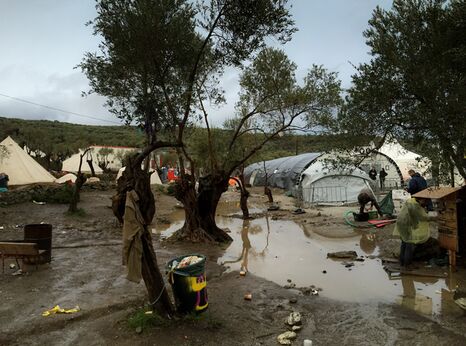 Greek authorities intend to close the open, self-organised refugee shelter PIKPA on 15 October. PIKPA has been operating in Lesvos since 2012, hosting and assisting thousands of refugees and asylum-seekers among the most vulnerable. Greek authorities must revoke the decision to close PIKPA, let the organization operate freely, protect its around 100 residents, and ensure and promote open and safe spaces for asylum-seekers and refugees in Greece.

Since 2012, the open and self-organised shelter PIKPA, run by the NGO Lesvos Solidarity, has been offering accommodation and other services to over 30,000 refugees and asylum-seekers on the island of Lesvos, especially among particularly vulnerable groups, such as families, victims of torture and LGBTI people. The efforts and contribution made by the shelter have been recognised by many, including the United Nations High Commissioner for Refugees (UNHCR), which awarded the founder of PIKPA with the Nansen award in 2016. Amnesty International has a long history of cooperation with PIKPA and Lesvos Solidarity. In 2018, former Amnesty International Secretary General Kumi Naidoo met with various representatives of Lesvos-based NGOs, including Lesvos Solidarity, and visited PIKPA, as part of his mission to Greece.

PIKPA and other facilities, such as the Kara Tepe camp, run by Lesvos municipality, have stood in contrast to the “Moria model”, symbolising an alternative approach to the reception of asylum-seekers and refugees, based on a sense of community and solidarity, offering safe and humane conditions to their residents. Together with PIKPA, Kara Tepe is also at risk of closure (see: https://www.lesvossolidarity.org/en/blog/news/save-dignity-save-pikpa-a…).

Over the years, PIKPA has been threatened with closure on other occasions, including in 2018. PIKPA/Lesvos Solidarity staff have also been the target of various attacks by local groups and individuals (for more details see also Amnesty International report of April 2020: https://www.amnesty.org/en/documents/eur01/2077/2020/en/).

The announcement regarding PIKPA and Kara Tepe imminent closure come at a time when NGOs working on migration and asylum in Greece are facing an increased vilification, as evidence in an Amnesty international report from March 2020 (https://www.amnesty.org/en/documents/eur01/1828/2020/en/). In addition to attempts to criminally prosecute human rights defenders supporting refugees and migrants, as evidenced by the case of Sarah Mardini and Sean Binder, in April 2020 the Government introduced new, tougher rules regulating the conduct and registration of NGOs, which greatly restricted their freedom of association and ability to operate (see here: https://www.amnesty.org/en/documents/eur25/2821/2020/en/). Equally, authorities have also adopted an openly hostile rhetoric towards NGOs, with Deputy Minister for Immigration and asylum Giorgos Koumoutsakos comparing them to leeches (https://www.amnesty.org/en/documents/eur25/2821/2020/en/).

Greece is one of the main host countries of refugees and asylum-seekers in Europe and one of the countries where the EU experimented its ‘hotspot approach’, establishing large reception and identification centres (RICs) on the five Aegean islands. Since the ‘refugee crisis’ of 2015 and following the 2016 EU-Turkey deal that resulted in the confinement of those arriving on the Greek islands, these centres, and particularly Moria camp on Lesvos, have been consistently overcrowded and in deeply substandard living conditions. As a result of these EU policies, today over 22,000 people live in deplorable conditions on the islands’ RICs, which are designed to host just over 6,000.

From 8 September 2020, consecutive fires destroyed Moria camp, leaving the nearly 13,000 residents without a shelter. Since mid-September Moria residents have been transferred to a temporary RIC that was hastily established in the Kara Tepe area. Unaccompanied minors previously hosted in Moria have been moved to mainland Greece. Living conditions in the new temporary RIC are substandard and there are no adequate safeguards for those in vulnerable situations.

The Greek Minister of Immigration and Asylum is the central authority competent for all aspects of migration and asylum policy, including RICs and relations with NGOs and third parties working in these areas. Since late 2019, the Minister has been a strong proponent of centralising the management of the reception system in Greece, also through the creation of ‘closed-controlled’ centres and through the gradual closure of alternative accommodation systems, such as those provided in hotels on mainland Greece. The temporary RIC set up in Lesvos can be considered a first example of the implementation of this model, but more facilities are being established on other Aegean islands with a view to wholly replace open camps.