On 2 January 2021, Ibrahim Ezz el-Din appeared before the Supreme State Security Prosecution for investigations in a new case (No. 1018/2020) over baseless charges of "belonging to a terrorist group". On 27 December 2020, the Cairo Criminal Court had ordered his release in another case, after 13 months of arbitrary pre-trial detention, and he had been transferred the next day to the Samanoud police station in the governorate of his residence, in preparation for his release. 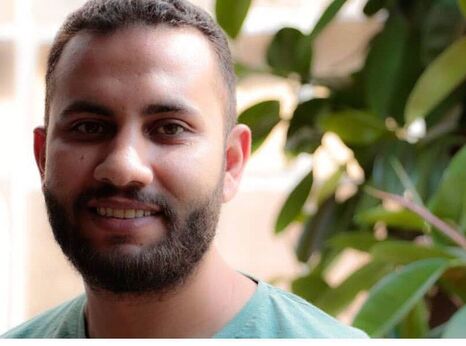 On 2 January 2021, Ibrahim Ezz el-Din appeared before the Supreme State Security Prosecution for investigations in a new case (No. 1018/2020) over baseless charges of "belonging to a terrorist group". On 27 December 2020, the Cairo Criminal Court had ordered his release in another case, after 13 months of arbitrary pre-trial detention, and he had been transferred the next day to the Samanoud police station in the governorate of his residence, in preparation for his release.

Ibrahim is a researcher at the Egyptian Commission for Rights and Freedoms (ECRF), where he focuses on the right to housing. Plain clothes police arrested Ibrahim on the night of 11 June 2019 from the street near his home in Cairo. The authorities subjected him to enforced disappearance through concealing his fate and whereabouts for 167 days and denied having him in custody to his relatives and lawyers. On 26 November 2019, Ibrahim was brought before the Supreme State Security Prosecution (SSSP). According to his lawyer, he appeared physically weak and lost a considerable amount of weight. He told the prosecutor that he was tortured during his incommunicado detention to extract information about his relationship to the ECRF and about the organization’s work. He also complained about being held in inhumane and degrading conditions of detention, at several security agencies locations.

In recent months, the SSSP has been increasingly bypassing court or prosecution decisions to release detainees held in prolonged pre-trial detention by issuing new detention orders pending investigations into similar charges in separate cases, in effect allowing for their indefinite detention without charge or trial. This practice, commonly referred to as “recycling”, has been used against several activists and human rights defenders including Mahienour el-Masry, Solafa Magdy, Esraa Abdelfattah, Alaa Abdel Fattah and Mohamed el-Baqer.

In April 2020, Ibrahim was taken to the prison hospital, but the prison authorities did not share his medical record with his family, hindering their ability to consult a private doctor and prescribe him the appropriate dosage of medication. The prison hospital does not have X-ray equipment needed to diagnose Ibrahim's back pain. Ibrahim’s poor health puts him at increased risk of the effects of a virus like COVID-19, according to the World Health Organisation’s list of vulnerable groups, particularly as he suffers from chronic allergies that cause respiratory difficulties.

He is the fifth person affiliated with the ECRF to have been arrested since 2016. His arrest follows the detention of labour rights lawyer Haytham Mohamdeen, who also works at ECRF, on 13 May 2019 on trumped-up charges of “aiding a terrorist group”. In May 2018, Egyptian security forces arrested Amal Fathy, a human rights defender and wife of the Executive Director of ECRF and former Amnesty International Researcher Mohamed Lotfy, over a video critical of the authorities’ failure to address rampant sexual harassment. She was conditionally released in December 2018 and put under house arrest until 14 March 2020 when SSSP lifted all precautionary measures imposed on her. In 2016, authorities had also arrested Minorities Programme Director Mina Thabet and head of the board Ahmed Abdallah, before releasing them without charge.

Ibrahim has been unable to defend his master’s thesis as scheduled in December 2019 given his arrest. While Ibrahim’s lawyer obtained permission for him to receive books in prison, he was prevented from writing his thesis by prison authorities. Ibrahim is allowed one visit per month for a duration of 10 minutes. He also receives packages that include food and medicines once a week.
Ibrahim’s arrest came amid a human rights crisis in Egypt, characterized by a crackdown on independent civil society and arrests of hundreds of individuals over their human rights work or their exercise of their rights to freedom of expression or peaceful assembly. Many of those arrested have been abducted and subjected to enforced disappearances, before being charged with unfounded “terrorism” charges and held in pre-trial detention for months or even years, without trial. (see www.amnesty.org/en/documents/mde12/1399/2019/en/).

Amnesty International has documented Egyptian security forces’ use of enforced disappearance as a tool against political activists and protesters, (see www.amnesty.org/en/documents/mde12/4368/2016/en/).Hundreds of people forcibly disappeared were arbitrarily arrested and held incommunicado in secret detention with no access to their lawyers or families and no external judicial oversight. ECRF is one of the main Egyptian NGOs working extensively on the issue of enforced disappearances.