On 30 August 2020, the Supreme State Security Prosecution (SSSP) interrogated arbitrarily detained human rights lawyer and activist, Mahienour el-Masry, over charges of "joining a terrorist organisation" as part of the recently opened case No. 855/2020. 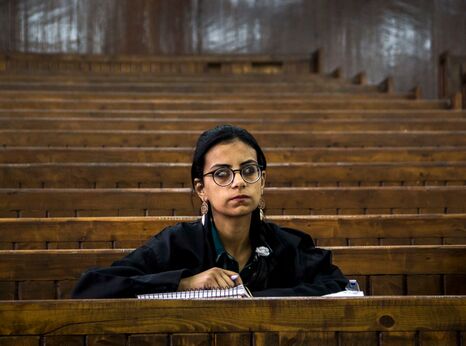 On 30 August 2020, the Supreme State Security Prosecution (SSSP) interrogated arbitrarily detained human rights lawyer and activist, Mahienour el-Masry, over charges of "joining a terrorist organisation" as part of the recently opened case No. 855/2020.

Mahienour has been detained since 22 September 2019 in relation to another case (No. 488/2019), also over unfounded charges including “aiding a terrorist group in achieving its goals” and “spreading false news”.

On 22 September 2019, security officers in plainclothes arrested Mahienour el-Masry. A Supreme State Security Prosecutor (SSSP) later questioned her on unfounded charges including “aiding a terrorist group in achieving its goals” and “spreading false news”. These charges are related to Mahienour’s participation in protests in March 2019 sparked by a deadly train crash in Cairo that resulted in the killings of 25 people and dozens of further injuries. The prosecutor then ordered her detention in Al-Qanater women’s prison, pending investigations.

On 30 August 2020, Mahienour has been added to a new case (No. 855/2020) and is now facing additional investigations into the charge of “joining a terrorist organisation”. The case includes other human rights defenders, lawyers and journalists, such as Esraa Abdelfattah, Solafa Magdy and Mohamed el-Baqer.

Since the outbreak of COVID-19, Al-Qanater Prison authorities did not allow Mahienour el-Masry to send letters to her family.

Mahienour’s arrest in September 2019 came against the backdrop of the largest wave of arrests since 2014. On 20 and 21 September 2019, scattered protests broke out in different Egyptian cities calling on President Abdel Fattah al-Sisi to resign. The protests are believed to have been sparked by corruption allegations shared by former army contractor Mohamad Ali, who has accused army leaders and the president of wasting public money on building luxury properties. Amnesty International has documented the arrest of 76 individuals in relation to the protests between 20 and 29 September in six cities. Human rights lawyers working with NGOs including the Egyptian Center for Economic and Social Rights and Egyptian Commission for Rights and Freedoms have documented at least 2,300 arrests. According to lawyers, scores of detainees have been released without questioning, but many others remain in detention. The wave of arrests included journalists, human rights lawyers, activists, protesters and political figures in a bid to silence critics and deter further protests.

Mahienour is a prominent human rights lawyer in Alexandria, where she played a leading role in defending the rights of workers, women and refugees. Since 2014, Mahienour has been in and out of detention multiple times in connection to her human rights activism or legitimate exercise of her rights to freedom of expression and peaceful assembly. While in detention in 2014 for exercising her right to freedom of assembly, she was awarded the Ludovic Trarieux Human Rights Prize, given each year to a lawyer working in defence of human rights.

In February 2015, Mahienour was sentenced to two years in prison, reduced to one year and three months on appeal. She was convicted of “protesting without authorization”, “damaging police property”, “attacking security forces” and “threatening public security” on charges stemming from her participation, on 29 March 2013, in a protest in front of al-Raml Police Station in Alexandria. The protest was in solidarity with lawyers who were detained and interrogated inside the police station and who had accused police officers of verbally and physically attacking them. On 13 August 2016, Mahienour was released from jail after serving her full sentence.

On 14 June 2017, Mahienour, and activists Moataseem Medhat, Asmaa Naeem, Waleed el-Amry and Ziad Abu el-Fadl participated in a protest in Alexandria against the Egyptian government’s decision to hand over control of two islands, Tiran and Sanafir, to the Kingdom of Saudi Arabia. On 18 November 2017, the Montazah Misdemeanour Court in Alexandria ordered the pre-trial detention of Mahienour el-Masry and Moataseem Medhat. On 30 December 2017, the same court sentenced both to two years in prison for “participating in an unauthorized protest” and “show of force”. The court also sentenced the three other activists to three years in prison, in absentia. On 13 January 2018, the Montazah Misdemeanour Court of Appeals acquitted Mahienour and Moataseem Medhat of all charges.