Server Mustafayev, a human rights defender from Crimea currently standing trial before a Russian military court, is being denied adequate medical care. He is suffering from high fever and a viral respiratory infection, similarly to two of his co-defendants. Despite their condition, they were forced to attend lengthy court hearings, without water or food. 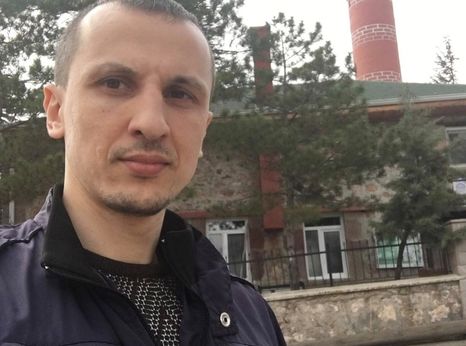 Server Mustafayev, a human rights defender from Crimea currently standing trial before a Russian military court, is being denied adequate medical care. He is suffering from high fever and a viral respiratory infection, similarly to two of his co-defendants. Despite their condition, they were forced to attend lengthy court hearings, without water or food.

On the morning of 19 March, Server Mustafayev had a fever and was given a fever-reducing injection before being transferred to court. However, his fever went up again after several hours and a paramedic was brought into court to assist him – again injecting him with a fever-reducing drug. Server's court hearing was stopped, but his co-defendants hearings' continued.

Server was removed from the court room at around 4pm, but Server's lawyer is concerned that he may not have been immediately transferred back to the detention centre and may have been forced to wait for his co-defendants' hearings to end. If the lawyer's concerns are valid, that means Server would not have been transferred to detention centre until about 11pm, with the rest of his co-defendants, which would be very concerning, give his current condition.

According to Server's lawyer, he is still being denied adequate medical help, despite his ongoing high fever and dry cough. Rather than receiving medical help, he has been obligated to attend court hearings, with his next hearing on extending his pre-trial restrictions scheduled on Monday 23 March. Server has requested to be tested for COVID-19 (see here).

Who is Server Mustafayev?

Server Mustafayev is the founder and coordinator of the grassroots movement, Crimean Solidarity, in Russian-occupied Crimea. The movement was created on 9 April 2016 in response to the political and religious persecution of Crimean Tatars and others by the Russian authorities. The movement brings together activists, lawyers and the relatives of those who have been arrested and prosecuted, to ensure they can access legal aid, financial, medical and other vital support.

In the absence of free media, and in light of persecution of all dissenting voices in Crimea following its illegal annexation by Russia in 2014, the movement also seeks to raise awareness on the ongoing human rights violations taking place in Crimea.

On 21 May 2018, Server's home was searched by members of the Russian Security Service (FSB), before he was taken to the local FSB headquarters, in the Crimean capital, Simferopol, and charged with “membership of a terrorist organisation”, over his alleged links to Hizb ut-Tahrir, an international Islamic organisation that is banned as a “terrorist” group in Russia, but is legal in Ukraine. Its members have not engaged in, nor advocated violence, in Crimea neither before nor after the peninsula’s occupation in 2014.

Alleged membership of Hizb ut-Tahrir has been used by the Russian authorities in occupied-Crimea as a pretext for prosecution of dissenting voices, including human rights defender Emir-Usein Kuku.

Server's pre-trial detention was first ordered on 22 May and has been repeatedly prolonged since. According to his lawyer, the only evidence against Server is an audio-recording of his brief remarks, including a question he asked during a religious lecture held at a mosque in Bakhchisaray on 2 December 2016. He asked if one can love a person “in general”, yet hate the same person for a particular action, and elaborated his point, without saying anything that could be seen as inciting hatred or violence. Seven other men were charged with terrorism-related charges as part of this case. All of them are incriminated on the basis of recordings of their attendance at the December 2016 lecture in Bakhchisaray Mosque and other meetings.

The lecture was attended by about 70 other people and was advertised openly in advance. Yet the investigation concluded that Server was taking part in a secret Hizb ut-Tahrir gathering. On 22 February, Server was also charged with “conspiring to seize power by violent means”. While the charges against Server carry up to 25 years in prison, the investigation has failed to provide any evidence that he has committed any internationally recognised crime. Server denies he was involved in any “terrorist” activities.

Server was transferred from Crimea to a detention centre in Russia on 13 September. By transferring prisoners from an occupied territory to Russia, trying them under Russian law and making them stand trial in a military court, the Russian authorities are violating international humanitarian and human rights law.

People who have opposed the Crimean Peninsula's occupation and illegal annexation by Russia, and the human rights violations committed there since 2014, have faced persecution, including harassment, prosecution under trumped-up charges and enforced disappearances. International human rights monitors do not have access to Crimea and independent media are either banned or forced to shut down.