On 30 August 2020, the Supreme State Security Prosecution (SSSP) interrogated lawyer Mohamed el-Baqer over unfounded charges, including "joining a terrorist organisation", as part of a recently opened case (No.855/2020). Mohamed el-Baqer is a prisoner of conscience, held solely for his human rights work. 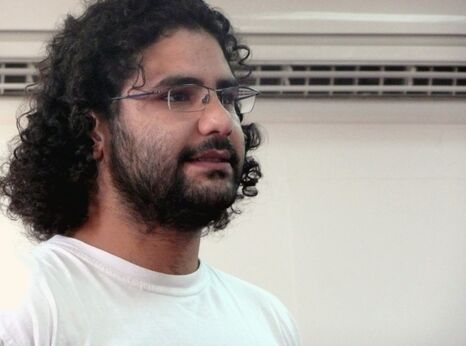 On 30 August 2020, the Supreme State Security Prosecution (SSSP) interrogated lawyer Mohamed el-Baqer over unfounded charges, including "joining a terrorist organisation", as part of a recently opened case (No.855/2020). Mohamed el-Baqer is a prisoner of conscience, held solely for his human rights work.

Mohamed el-Baqer and Alaa Abdel Fattah have been detained since 29 September 2019 as part of Case No.1356/2019. They are subjected to investigations into charges of “joining a terrorist group”, “funding a terrorist group”, “disseminating false news undermining national security” and “us[ing] social media to commit a publishing offense”. Their detention came amid the largest arrest campaign since President Abdel Fattah al-Sisi came to power in 2014.

On 29 March 2019, Alaa Abdel Fattah was released on probation after serving an unjust five-year prison term for participating in a peaceful protest. His probation terms required him to spend 12 hours every night at a police station for five years. On 29 September 2019, Alaa Abdel Fattah did not leave the Dokki police station in Cairo, where he spent his probation. The police told his mother that he was taken by National Security Agency (NSA) officers to the SSSP. Later that day, Mohamed el-Baqer entered the SSSP building to represent him. According to their families and friends, Alaa Abdel Fattah and Mohamed el-Baqer’s whereabouts were unknown until on 1 October 2019, when they appeared at Tora Maximum Security Prison 2. Since their arrest, Mohamed el-Baqer and Alaa Abdel Fattah have been banned from receiving books, exercising, having a radio, mattresses and hot water.

In September 2020, small and scattered protests took place in several villages, towns and poor urban communities in Egypt, where protesters took to the streets against the government's policy of demolishing unregistered houses and a law on reconciliation for unregistered houses. Some protestors also voiced chants against President Abdel Fattah al-Sisi and protested the killing of one man during a police raid in Luxor governorate. The Egyptian security forces used teargas, batons, birdshot and on at least one occasion live ammunition to disperse the protests.

According to information collected by the Egyptian Commission for Rights and Freedoms and the Egyptian Front for Human Rights, human rights groups, between 10 and 29 September 2020 Egyptian security forces arrested between 571 and 735 individuals in 17 governorates, all detained pending investigations on flawed "terrorism" and protest related charges.

In recent months, the SSSP has been increasingly bypassing court or prosecution decisions to release detainees held in prolonged pre-trial detention by issuing new detention orders covering similar charges. In addition to Mohamed el-Baqer, the new case ( No. 855/2020) opened by the SSSP also includes other prisoners of conscience, already held in pre-trial detention in relation to separate investigations into similar unfounded “terrorism”-related charges, such as human rights defender Mahienour el-Masry and journalists Solafa Magdy and Esraa Abdelfattah.

According to information gathered by Amnesty International, prosecutors have based accusations against them mainly on NSA investigations case files, which defendants and their lawyers were not allowed to examine.

Alaa Abdel Fattah, a well-known political activist and government critic, has been repeatedly arrested in recent years including for his role in the 2011 uprising. Mohamed el-Baqer is a human rights lawyer and director of Adalah Center for Rights and Freedoms, which he founded in 2014. The organization focuses on criminal justice, the right to education and students' rights.