On 4 October 2020, Mohammed al-Sulaiti, a Qatari citizen, was arbitrarily detained after vocally criticizing his government on Twitter. This is the second time he has been arbitrarily detained, having spent five months in detention in 2018 with no charges. He was then put under travel ban with no legal justification. After protesting the ban on Twitter, he has again been detained without charge. 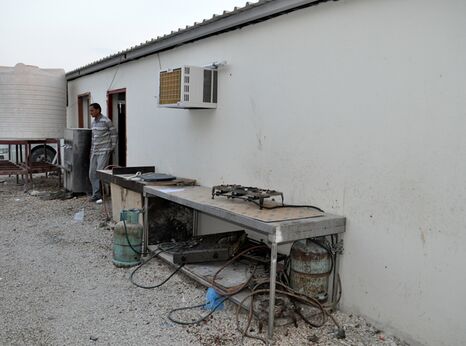 On 4 October 2020, Mohammed al-Sulaiti, a Qatari citizen, was arbitrarily detained after vocally criticizing his government on Twitter. This is the second time he has been arbitrarily detained, having spent five months in detention in 2018 with no charges. He was then put under travel ban with no legal justification. After protesting the ban on Twitter, he has again been detained without charge.

At the time of his first detention in July 2018, Mohammed al-Sulaiti, a Qatari citizen, had been living in the U.S. since 2015. He held a valid 10-year visa and lived in the greater Detroit area, where he co-owned and managed a grocery store in Detroit and a restaurant in Ann Arbor. His family resided with him and his children attended school there. In summer 2018 he booked a flight for a vacation with his family to Turkey. En route, however, during a layover at Hamad International Airport in Doha on the night of 17–18 July 2018, Mohammed was detained. For the next five months he was held in the custody of the State Security Bureau, a powerful executive agency subordinate only to the Emir (under Article 1 of its constitutive law). No charges were ever raised against Mohammed and he was denied effective access to a legal defence.

According to Mohammed and sources close to him, his detention in 2018 traced back to a dispute with the family of his ex-wife, who acted through a relative in the Office of Public Prosecution to raise accusations of political opposition against him. Mohammed and those close to him told Amnesty International that he had no interest in politics, and his only criticisms of the government arose because of his arbitrary detention and his ban from travel after he was released from jail on 22 December 2018. Regardless of the reasons for a detention, the burden is on the state to justify depriving an individual of his or her liberty. Procedural protections to ensure that the right not to be arbitrarily detained is not violated are included in Articles 9 and 14 of the International Covenant on Civil and Political Rights, to which Qatar acceded in 2018. The UN Human Rights Committee, the body that interprets and monitors compliance with the Covenant, notes that the right to fair trial enshrined in these articles “requires that the accused is granted prompt access to counsel” and can “meet … in private” with their attorney, and that the right to prepare a legal defence “must include access to … all materials that the prosecution plans to offer in court against the accused.”

Throughout his first detention, Mohammed was given no documentation whatsoever relating to accusations, potential charges, investigations, or any evidence against him. He was unable to prepare an effective legal defence with his lawyer, with whom he only had a single opportunity to confer, in the second half of September. Aside from this one meeting, Mohammed saw his lawyer only in court; in some sessions they were not even seated together. After an initial period of detention of up to 30 days by order of State Security – acting under Article 7 of the State Security Bureau Law – responsibility for a detainee’s continued jailing shifts to the Office of Public Prosecution, which under Article 33.2 of the Code of Criminal Procedure must then make a case for continued detention before a court once every 30 days. In Mohammed’s case these court dates were treated purely as a technicality and he was granted no substantive right to contest his continued detention, as the refusal to let him meet with a lawyer shows. Mohammed was held for the initial four months of detention by the State Security Bureau, at a site within a large compound which also houses a major Ministry of Interior building (just to the east of the neighborhood known as Fereej bin Omran). In November he was transferred to another detention facility, located next to the Industrial Area bridge on Salwa road leading out of Doha. Information independently gathered by Amnesty International indicates that this is the main pre-trial detention facility in Qatar, though it does not appear in online maps. Mohammed was held there for the final month of his detention.

After his release he was held in Qatar under travel ban, preventing him from returning to his businesses and livelihood in the U.S. Mohammed was increasingly vocal about the travel ban, and in August 2020 Amnesty International published a statement identifying his ban as one of several arbitrary administrative punishments imposed on Qatari citizens. Over the next six weeks Mohammed cited the piece repeatedly on his Twitter account, @mohdalsulait74i. On 4 October he was detained from his home, seemingly without a warrant, and his Twitter account abruptly disappeared, though many examples of its content – such as his call for an online poll to tally of the number of Qataris under travel ban – remain preserved through the Internet Archive project. After his detention Amnesty wrote to Qatar’s National Human Rights Committee (NHRC), Office of Public Prosecution, and Government Communications Office, in an effort to clarify his fate. On 19 October NHRC replied stating that Mohammed is being detained by State Security for investigation of unspecified “State Security Crimes”. Mohammed was held incommunicado for nearly two weeks after his detention, and to date has been granted only one phone call with his family. The Working Group on Arbitrary Detention noted in its recently published report on Qatar that during its official visit to Doha in 2019 it was not permitted to visit the State Security detention center, that the law governing this agency’s power of detention grants it an exceptional and highly problematic level of discretionary power, and that “the Working Group was informed that in practice, such detention leads to very long periods of deprivation of liberty, in violation of international human rights norms.”