Ten of the 12 Hongkongers arrested in August 2020 by the Chinese coast guard were sentenced on 30 December 2020 without a fair trial. Having been detained for more than four months, the 10 individuals still have no access to their families or family-appointed lawyers. 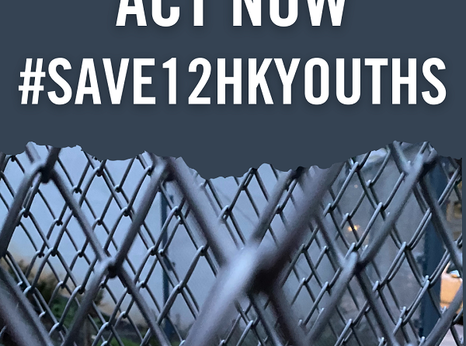 Ten of the 12 Hongkongers arrested in August 2020 by the Chinese coast guard were sentenced on 30 December 2020 without a fair trial. Having been detained for more than four months, the 10 individuals still have no access to their families or family-appointed lawyers.

LIU Tsz-man (廖子文) and another teenager were under 18 at the time of arrest. In late December 2020, the authorities decided to not prosecute the two teenagers and handed them over to the Hong Kong police on 30 December 2020. Family of one of the teenagers said he looked nervous after returning to Hong Kong and avoided talking about his experience of being detained in Yantian District Detention Centre in mainland China. After being repatriated from mainland China to Hong Kong, these two will face criminal charges made against them before they left Hong Kong in August 2020. Liu is accused of conspiracy to commit arson and possession of anything with intent to destroy or damage property. The other teenager is accused of attempted arson and possession of offensive weapons.
Since the 12 Hongkongers were intercepted on 23 August 2020, the Chinese authorities have deprived them of their right to legal representation of their choice. Apart from rejecting all requests made by family-hired lawyers to meet with the detained Hongkongers, the authorities threatened and intimidated at least four of the family-hired lawyers to withdraw from this case. The Sichuan and Hunan Provincial Department of Justice informed Lu Siwei and Ren Quanniu, lawyers representing Quinn Moon and Wong Wai-yin, on 31 December 2020 and 4 January 2021 that their lawyer licenses were revoked. The authorities will finalize these decisions after holding review hearings in January 2021.

Amnesty International has documented numerous cases in which detained individuals in mainland China, many of them human rights defenders, have been routinely deprived of their right to see lawyers that they or their families have chosen to represent them. In some instances, the authorities have appointed lawyers for detainees without their consent or consent of the family. In other cases, the authorities threatened lawyers to drop cases, claimed that detainees dismissed family-hired lawyers without producing any proof or stopped families from hiring lawyers – all of which effectively amounts to depriving the detainees’ of their right to legal representation. Individuals deprived of legal representation of their own choice are often denied access to information about their legal rights, making them more vulnerable to unfair legal procedures.

Meeting lawyers of one’s own choosing is an integral part of right to a fair trial and a fundamental safeguard for the prevention of torture and other ill-treatment. Denying these 12 individuals access to legal representation and to family members is in contravention of international human rights, including the Convention on the Rights of the Child and the Basic Principles for the Protection of All Persons under Any Form of Detention or Imprisonment, as well as China’s Criminal Procedure Law.

Before being arrested and detained in mainland China for “secretly crossing the border”, 11 of the 12 individuals had been arrested in Hong Kong for a range of alleged offences, including conspiring to wound with intent, rioting, assaulting a police officer, conspiring to commit arson, possessing a substance with intent to destroy or damage property, making an explosive substance, committing arson with intent and conspiring to commit arson with intent. One of the 12 detainees, LI Yu-hin, reportedly left Hong Kong to seek asylum after he was arrested for “possessing ammunition without license” and “colluding with foreign or external elements to endanger national security”. LI is among at least 89 activists and protesters who have been arrested for violating the Hong Kong national security law so far since its enactment on 30 June 2020. The United Nations human rights office and expert bodies have repeatedly expressed concerns about the national security law, stating the broadly worded legislation can lead to “discriminatory or arbitrary interpretation and enforcement which could undermine human rights protection”. Some among the arrested individuals are accused of endangering national security solely for acts of peaceful expression, such as possessing banners with political slogans or posting on social media platforms. According to international human rights law, “national security” cannot be invoked to deny people the right to express different political views and to exercise their other human rights as protected by international legal standards.