UK will take vulnerable refugees from the Syrian conflict 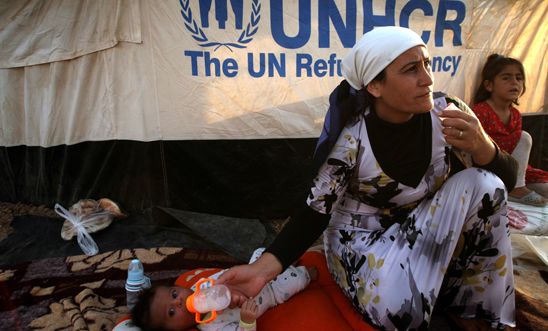 Last night the government announced that the UK will work alongside the UN refugee agency, the UNHCR, to identify and resettle some of the most vulnerable refugees from the Syrian conflict, providing emergency sanctuary for those who need it most.

We are delighted – after months of refusal by the government, pressure from you means that the UK resettlement programme will offer a chance for shelter in the UK; this programme could make the difference between life and death for those fleeing the bloody conflict.

They have witnessed and survived unimaginable horrors – systematic torture and sexual violence, the destruction of their homes, the break-up of their families – and now a small number of refugees will be allowed a safe haven in the UK.

The government has said it will prioritise resettlement for survivors of torture and sexual violence, and women and children at risk or in need of medical care.

Thanks to your letters, emails and tweets we are pleased to say that the resettlement scheme will also provide places over and above the UK’s current commitments through its Gateway programme, which we hope will ensure that resettlement opportunities also continue to be available for refugees from the rest of the world.

A welcome change of heart from the government

Until now, our government was refusing to resettle a single Syrian refugee, turning down previous UN requests to resettle to some of the most vulnerable victims of the conflict. The UK has committed £600 million in humanitarian aid for people inside Syria and in the region which has been warmly welcomed. But while the UK is one of the largest contributors of aid to the region, aid alone is not enough.

After months of weak arguments and refusal to share responsibility for resettling some of the escalating numbers of Syrian refugees, the government has eventually done the right thing. The announcement comes after a combination of months of lobbying work from our refugee specialists and the incredible response and action taken by Amnesty supporters.

You helped make this happen

In the past week alone, almost 10,000 of you emailed your MP and asked them to support the case for the UK to resettle some of the most vulnerable people to flee the Syrian conflict.

94% of MPs in the UK received an email from an Amnesty supporter in their constituency asking them to support a UK resettlement scheme. Today’s shift from the government is testament to people power, with constituents contacting their MPs in their thousands about this issue. Across the UK, our calls were being heard.

The background: until now the UK government had refused to participate in a UNHCR resettlement scheme. But a week is a very long time in politics…

‘The children of Syria have suffered grievously. Are we really saying that we cannot take a few hundred of those who have suffered most?’
Menzies Campbell

Today we'll be joining @AmnestyUK at Parliament to brief MPs ahead of tomorrow's vote on refugee resettlement #Syria http://t.co/jGUVDsntss

‘I am pleased to be able to announce that the UK will be providing refuge to some of the most vulnerable Syrian refugees.’
Nick Clegg

UK to resettle some of most vulnerable #Syria refugees. Thank you for emailing - you've all done this. pic.twitter.com/okaP6ARDWF

29 January
Home Secretary Theresa May outlines how the scheme will work, ahead of a Commons debate on the issue
Watch video

Since the bloody conflict started in Syria nearly three years ago more than 100,000 people have been killed and more than 2.3 million people have fled the country. More than half of Syria's refugees are children.

As the number of Syrians desperately seeking safety continues to rise, 97% are being sheltered by a small number of countries neighbouring Syria. But these countries are struggling to cope: Lebanon alone is sheltering almost 900,000 refugees from the Syrian conflict, increasing the country's population by 19%.