The strangers and the canaries - Football Welcomes 2018 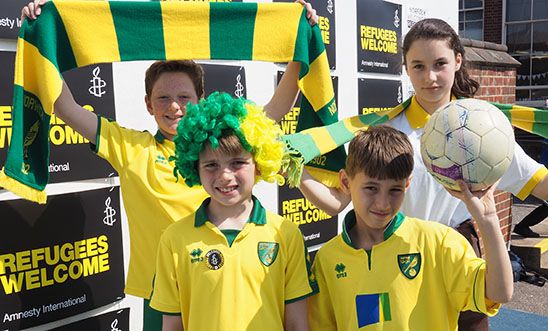 Over 18,000 pupils in Norfolk took a break from normal lessons on 20 April to learn about refugees, migration and football. Jake Brown, a teacher at Avenue Junior School and project lead for Norfolk Welcomes – Football Welcomes, explains how the little-known story of a group of ‘Strangers’ and their pet canaries helped to inspire the event.

How did Norfolk Welcomes – Football Welcomes come about?

A couple of years ago I was watching the refugee crisis unfold on TV and felt, like lots of people, really upset, confused, angry and powerless. As a teacher, I thought, if I’m having these reactions, what are the children feeling? I started looking to see if there were any lessons or materials on this I could use to help the children make sense of it and it grew from there really.

About 18 months ago I kick-started the Norwich Schools of Sanctuary network, under the umbrella of the City of Sanctuary movement. We’ve got seven schools of sanctuary but wanted to involve more. A special day seemed a good way to get schools to engage in the issue.

Football is such a passion for young people, and a really good way to capture their attention and pull them into complex conversations. Over the last year I’ve researched the history of migration in Norfolk, and Norwich City jumps out as a really interesting story. In the 16th century, there was a wave of refugees from the northern lowlands of Europe. They were fleeing religious persecution and became known as the ‘Strangers’. Famed for their weaving skills, they were invited to Norwich, which at the time was crying out for the rejuvenation of textiles industry.

A few families came at first, but soon over a third of Norwich’s population were refugees and it was a trilingual city – French, Dutch and English. The Strangers brought their pet canaries with them, and over the centuries the birds became synonymous with the city. In the early 20th century, Norwich City adopted the canary as their emblem and nickname. It’s a lovely example of a little-known story of how refugees have contributed to our culture, society and economy.

‘It was clear the war in Bosnia was coming and we had to leave to find safety. My entire family went to different countries. The hardest thing was leaving my grandparents behind and trying to start a new life in a new country but people here have been really friendly and helped me adapt to this city.’
Norwich City midfielder Mario Vrančić

What happened on the day?

On 20 April, we had 61 schools taking part, more than 18,000 pupils. Some schools took time off from the curriculum for a day of special lessons, activities and assemblies. We worked with Anglia Ruskin University and a team of citizen researchers who explored Norfolk’s history as a place of sanctuary. A team of teachers then used the research to produce lesson plans and activities.

The Strangers played a central role, because they had such an important role in the city’s development.

But there are other stories as well. We looked at footballers who played for Norwich City who had been touched by displacement. One of these is a current player, Mario Vrančić, whose family fled the Bosnian war and sought asylum in Germany. My class asked him questions and he answered them in a video, which was shared in assembly.

There was also a suggested non-uniform day: pupils were asked to donate £1 to charities supporting refugees and wear yellow or green – Norwich City’s colours – or a football kit of their choice. One school organised a football tournament and invited other schools to take part. It was all played in a very nice spirit, inclusive rather than competitive.

The children loved the day. It’s a real treat for them to come in without their uniform, which always makes for a special atmosphere. There was lots of art and drama activities – it was a really creative day. We had plenty of Football Welcomes stickers, badges and posters, so there was a lot of visibility in schools. The children also took them home and out into the community, so hopefully they inspired some conversations beyond the school gates. Our parents are always very supportive of the

work we do around sanctuary and supporting displaced people. In fact, many of them worked as citizen researchers on the project.

Do you have any advice for teachers keen to organise a similar day?

I’d suggest getting your school community involved. Speak to the parents, carers, colleagues, governors of the school and if you’re lucky, as I’ve been, you’ll find there are so many people who share a concern and an interest in displacement and are more than happy to share their skills and time to do something positive.

What are your plans for next year?

One of the inspirations behind Football Welcomes was to commemorate child refugees who arrived in the UK fleeing the Spanish Civil War. Several went on to become professional footballers, including the Gallego brothers, who spent most of their lives in East Anglia. Tony Gallego, a goalkeeper, played for Norwich briefly and both brothers played in Cambridge. Next year, we’re planning to use their stories as a focus for the next Norwich Welcomes – Football Welcomes.

2019 will be the 80th anniversary of the end of the Spanish Civil War next year, so that seemed a good opportunity to reflect on the stories of those unaccompanied children. Obviously, there are parallels with the many unaccompanied children who are being displaced at the moment around the world.