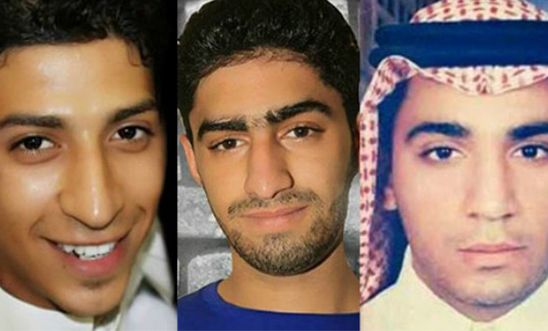 In the summer of 2017, we found out that the Saudi authorities were planning to execute several men. They had confessed to crimes after they had been badly tortured – but most of us could be forced to say anything under these conditions, even confess to a crime we didn’t commit.

That's what we believe happened to these 14 men, who were accused by the Saudi government of spying for Iran. Following an unfair trial based on confessions extracted by torture, they were sentenced to death by beheading.

We were outraged, and so were nearly 70,000 of you who emailed King Salman of Saudi Arabia to urge him to halt the executions immediately. We are still awaiting an update on this horrific situation.

On 1 June 2016, the Specialized Criminal Court (SCC) in Riyadh sentenced 14 men to death by beheading. They were:

They were charged with a series of offences including 'high treason' with some facing several other charges which are not recognised criminal offences under international law, such as 'supporting protests' and 'spreading the Shi’a faith'.

Put simply, they are victims of the Saudi commitment to use the death penalty as a weapon to crush dissent and neutralise political opponents.

The families of the 14 men have been kept largely in the dark, but on 23 July 2017 they learned that the sentences of their relatives have been upheld by the Supreme Court. This means they have exhausted their appeals and could be executed as soon as King Salman ratifies their sentences.

The men told the court they were subjected to prolonged pre-trial detention and were tortured during their interrogation to extract 'confessions', however the judge failed to order investigations into their allegations. Subsequently, the SCC appears to have based its decision on these forced 'confessions'.

At least 66 people had been executed in Saudi Arabia since the start of 2017, and this looming Saudi execution spree would significantly add to the toll.

We urged our supporters to rally for these men by emailing King Salman, demanding that he:

• immediately halt these executions and quash the convictions;

• ensure these men and all other people on death row after unfair trials are retried in proceedings meeting international fair trial standards and without recourse to the death penalty;

• order a prompt, impartial, independent and effective investigation into their allegations of torture and other ill-treatment;

• immediately establish an official moratorium on executions with a view to abolishing the death penalty in Saudi Arabia.

The death penalty is cruel, inhuman and degrading. Amnesty opposes the death penalty at all times – regardless of who is accused, the crime, guilt or innocence or method of execution.