The ritual murders of people with albinism in Malawi 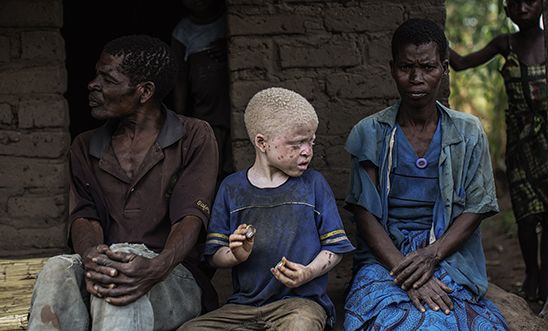 Two-year-old Whitney was abducted from her bed while she was sleeping. Baby Whitney’s skull, teeth and clothes were later discovered in a neighbouring village. Her brutal murder follows that of 9-year-old Harry, snatched from his home and found beheaded soon after. Whitney and Harry were targeted because they have albinism.

Thousands of people with albinism – particularly children – are at huge risk of abduction and killings in Malawi, where their body parts are sold for witchcraft.

There is a human rights crisis in Malawi. People are in huge amounts of danger because they are born with a genetic condition: albinism. They are being hunted for their bones and body parts, and the perpetrators are going unpunished.

There has been a huge rise in the number of attacks in the last two years. Malawi’s government urgently needs to protect the thousands of people with albinism – a vulnerable group of people at risk of abductions and killings.

David Fletcher, a teenager with albinism, had gone to watch a football match at Tete football ground in Nambirikira village on 24 April when he went missing.

On 2 May, police confirmed that David's body had been found in Mozambique with his hands and feet chopped off. David was last seen in the company of a colleague who disappeared along with him, who is still missing.

David was reportedly sold to a traditional healer in Mozambique. Two men were arrested in connection with his murder.

Woman mutilated while riding her bike

Jenifer Namusyo, a 30-year-old woman with albinism from Phalombe district in southern Malawi, left her home in Gwembere village on her bike on 30 April to seek traditional medicine in nearby Mwambeni village. She never made it.

Hours later, Jennifer's dead body and bicycle were found on the path to the village. Attackers had cut out her breasts and gouged out her eyes, and she had been stabbed several times.

Baby Whitney taken from her home

Two-year-old Whitney Chilumpha disappeared on the night of 3 April from her home in Chiziya village, Kasungu District. Whitney’s mum alerted the neighbours and they set about searching for the toddler, but Whitney was nowhere to be seen. The mother reported her missing daughter to the police.

On 15 April, baby Whitney’s skull, teeth and the clothes she had been wearing were discovered in a nearby village. Police are keeping Whitney’s father and another man in custody over her disappearance and murder.

Nine-year-old Harry snatched from his family

Harry Mokoshini was abducted on the night of 26 February when a gang of men broke into the family home in Moto Village, Machinga district. They took Harry from his mother, threatening and injuring her as they kidnapped her son before her eyes. Police found Harry’s severed head in a neighbouring village on 3 March.

Harry’s uncle has since been arrested in connection with the boy’s abduction and murder, along with another man who has an existing conviction for possessing the bones of someone with albinism. He had been fined the equivalent of $30 USD for the crime in 2015.

Murdered for their body parts David, Jennifer, Whitney and Harry are some of the latest victims of a horrific – and growing – trend in Malawi of abductions and killings of people with albinism, for their bones and body parts to be used in witchcraft.

Attacks increased sharply last year. At least 18 people have been killed for albinism in Malawi since November 2014; five others have disappeared without a trace in that time. 45 incidents were reported last year alone – of murders and attempted murders, abductions and attempted abductions – although the real figure could be much higher, due to the fact that secretive rituals in rural areas are rarely reported.

There is also no systematic documentation of crimes against people with albinism in Malawi.

Some children have been abducted and sold by family members. Relatives are allegedly linked with the disappearance and death of both baby Whitney and Harry.

In the case of Eunice Phiri, a 53-year-old woman with albinism, her brother and two other men tricked her to accompany them on a trip to Zambia on 23 January this year. Five days later Eunice’s body was discovered by a herdsman in Kasungu National Park. Her arms had been hewn off.

Even the dead are not left in peace. The police recorded at least 39 people with albinism being illegally exhumed from graves, or having body parts removed from their corpses. We are concerned that some of these reported cases might have been murdered and then disposed of, rather than graves that were exhumed.

Malawian President Peter Mutharika issued a statement in March last year condemning the wave of attacks on people with albinism. He called on police to arrest perpetrators and protect those with albinism and their families at risk of attack – but police and governmental response since then has been lacklustre.

Although some people have been arrested for albinism-related crimes, we have serious concerns about the inadequacy of police investigations, and perpetrators being dealt sentences not in line with the severity of the crime.

An amazing 70,000 of you called on the president of Malawi to: