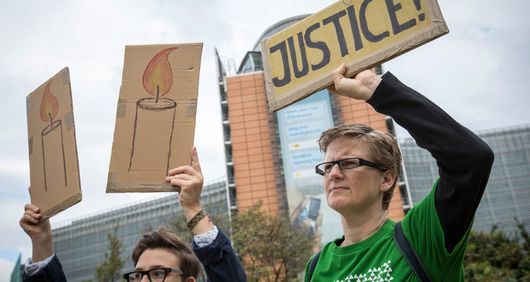 On 17 February 2020, the Federal Supreme Court in Abu Dhabi confirmed the verdict against five Lebanese men including Abdel Rahman Talal Chouman, who was sentenced to life imprisonment, as well as Ahmed Nimr Sobeh and another man who were sentenced to 10 years in prison on “terrorism” charges. The three men had been sentenced by the Federal Appeal Court in a trial that did not meet international fair trial standards.

On 17 February 2020, the State Security Chamber of the Federal Supreme Court upheld the Federal Appeal Court’s verdict against five Lebanese men whose charges included “forming a terrorist cell” and “planning terrorist attacks in the UAE on orders of Hezbollah”. Abdel Rahman Talal Chouman was sentenced to life imprisonment while Ahmed Nimr Sobeh and another were sentenced to 10 years in prison. Two other men received life sentences in absentia.

The three men’s trial and convictions were based on proceedings that failed to meet international fair trial standards, as the court used so-called “confessions” that were extracted under duress as evidence, and the defendants were detained incommunicado for months and denied access to lawyers during interrogation and investigation.

During the trial before the Federal Supreme Court, Abdel Rahman Talal Chouman’s lawyer, who had represented him before the Federal Appeal Court, was not allowed to attend the sessions and was replaced by a lawyer appointed by the Court. The last trial session lasted several minutes, allowing only for the reading of the verdict.

Amnesty continues to call on the Emirati authorities to quash the unreliable convictions and release the detained men unless there is evidence of a recognizable criminal offence and they can be guaranteed a fair trial, in line with international law and standards.

The verdict against the men is final and cannot be appealed. Amnesty International will continue to monitor their situation, will respond to any developments as appropriate and will explore further means of action.