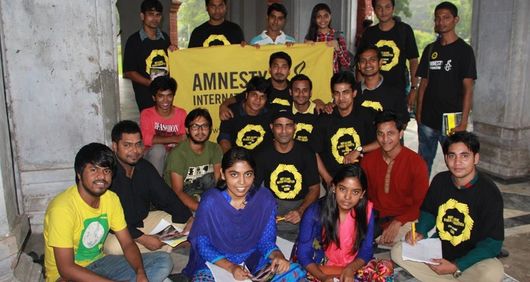 Bangladeshi folk singer, Shariat Boyati, has been arrested under the draconian Digital Security Act, for saying music is not forbidden in the Qur’an. He faces up to five years’ imprisonment on vague charges of hurting religious sentiment. Arrested for solely exercising his right to freedom of expression, Shariat Boyati must be immediately and unconditionally released.

Shariat Boyati is a singer in Bangladesh's popular Baul folk music community. Shariat used expletives and his own personal interpretation of Islam to criticise a section of hardline Islamic scholars, for fabricating and misrepresenting the philosophy of the religion at a Muslim community gathering in Dhaka, Bangladesh, on 24 December 2019. Police arrested him on 11 January 2020, on charges of “hurting religious sentiments”, under section 28(2) of the draconian Digital Security Act (DSA), nearly two weeks after his remarks were uploaded on YouTube.

Shariat Boyati’s lawyer, Abdullah Al Noman, told Amnesty International that his remarks against a section of Islamic scholars should not be construed as an attack against the entire Muslim community.

At least 14 offences under the DSA, including the charges against Shariat, are non-bailable. On 12 February 2020, the High Court in Dhaka asked the Bangladesh Government to explain within two weeks why Shariat Boyati should not be granted bail.

Freedom of expression under attack

Freedom of expression protects all forms of opinion, including those of religious nature. Journalists and critics in Bangladesh fear the DSA for its ability to muzzle dissent on digital platforms with extremely harsh forms of punishment, including life imprisonment. The UN High Commissioner for Human Rights has called on Bangladesh to “urgently revise the Digital Security Act, to ensure that it is in line with international human rights law.

In November 2018, Amnesty International released a report outlining sections within the DSA that are inconsistent with international human rights law; including the ICCPR, to which Bangladesh is a state party, and called on the Bangladesh Government to promptly amend the law.

Nearly 400 cases were filed against different individuals in the first 11 months after the DSA came into effect in October 2018. According to media reports, more than 200 cases have been dismissed for lack of sufficient evidence.