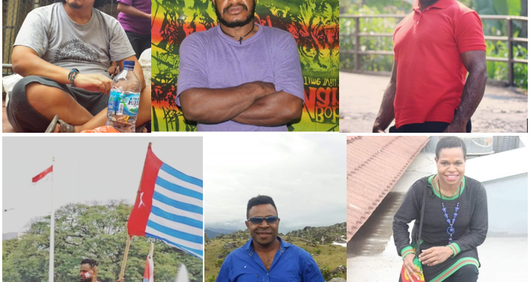 Who are the Papuan activists?

Between 30-31 August police across Indonesia arrested eight political activists for allegedly organising a peaceful protest in front of the Presidential Palace in Jakarta. The protest was in reaction to racist incidents committed against Papuan students in Surabaya and Malang, in the East Java Province of Indonesia. During the protest some of the protesters waved the Morning Star Flag, a banned symbol of Papuan independence.

On 30 August at around 6pm local time, plainclothes police arrested Dano (Anes) Tabuni and Carles Kosay at their rented home in Depok, West Java. No arrest warrant was shown and during the arrest a gun was pointed at the Papuan students by a police officer.

On 31 August, officers from the Jakarta Regional Police Force arrested Ambrosius Mulait and Isay Wenda, who on the day prior, were protesting with dozens of other Papuan students in front of the Jakarta Police Force Headquarters.

The same day, at around 7pm, plainclothes police arrested Arina Lokbere and her two housemates, who have since been released, at their house in South Jakarta without showing an arrest warrant. When one of the students wanted to change her clothes, a police officer told her, insultingly, “You Papuans generally don’t wear clothes.”

On 1 September the police released Arina Lokbere’s housemates without charge, while the other six activists remain detained, having been charged under Articles 106 and 110 of the Criminal Code.

Article 106 of the Criminal Code authorises the authorities to sentence a person “to life imprisonment or a maximum of 20 years imprisonment for makar – the intent to bring the territory of the state in whole or in part under foreign domination, or to separate part thereof”. In addition, Article 110 stipulates that conspiracy to commit makar is punishable as a violation of Article 106.

The “makar” articles are considered a crime against state security; therefore, while the activists have access to legal representation the lawyers can only watch without hearing the police interrogations against their clients. Indonesian authorities have used these criminal code provisions to prosecute dozens of peaceful pro-independence political activists over the last decade.

The last decade has seen an increase in pro-independence political activities in Papua, particularly those led by students and young people. They have routinely organised mass demonstrations in several cities in and outside of Papua to call for self-determination through a referendum.

Security forces have often used repressive measures against these activists, such as blanket prohibitions on peaceful protest, mass arrests, and prosecution under the makar provisions of the Criminal Code. Pro-independence political activists in Papua have also been victims of unlawful killings by security forces.

Amnesty International takes no position on the political status of any province of Indonesia, including on calls for independence. However, we believe the right to freedom of expression protects the right to peacefully advocate for independence, or any other political ideas that do not involve incitement to discrimination, hostility or violence.

The organisation acknowledges that there have clearly been incidents of violence committed by non-state actors in Papua recently, and recognises that the Indonesian government can use the domestic criminal law to address any violent attacks. However, the government has consistently failed to make a distinction between armed groups carrying out violent attacks and peaceful activists, as well as between peaceful expression of opinion and acts of physical violence.