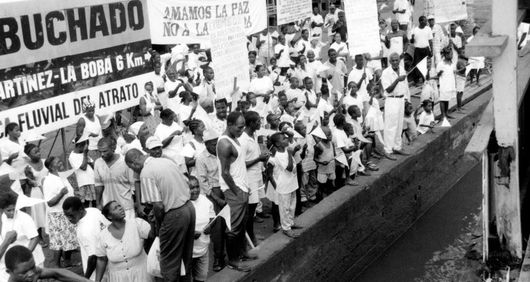 Members of dhColombia have been under surveillance, from unknown men, outside their homes and office. dhColombia is an advocacy organisation that provides legal support to victims of human rights violations and seeks accountability from prominent military members, public forces and multinationals. On August a member of dhColombia faced communication espionage, theft of sensitive information and death threats. On 4 October, dhColombia requested protection measures from the National Protection Unit (UNP) – they have not yet received a response. In light of this, we urge the UNP to grant dhColombia members the requested necessary protective measures.

Since August the staff members of Colombian human rights organisation, dhColombia, have experienced ongoing surveillance from unknown people. They are being watched at work and at home, with instances of spying on their communications and theft of sensitive information. On 4 October they submitted a request to the National Unit of Protection for protective measures but have yet to receive a response.

dhColombia is an advocacy group that works to provide timely support in urgent instances of human rights violations, both in support of individuals and whole communities. The organisation provides legal representation for victims in both national and international courts.

dhColombia also provides legal support to communities, families, organisations and social movements in cases of land restitution – the return of stolen land, defence of territory, and criminal punishments for companies linked to human rights violations. They have handled high-profile cases seeking accountability from military officers and other governmental actors.

Some of their cases include the Rios Vivo community case – a community impacted by the construction of a megaproject being constructed in their area, with social and environmental risks to their community; the San Jose de Apartado community – a long conflict stricken region in the mountains of Colombia; and the case of Alfamir Castillo – a human rights defender and social leader in Colombia, whose son experienced an extrajudicial killing, her vehicle was shot at in January 2019.

Because of their work, dhColombia members and their families are facing ongoing threats. dhColombia only has one individual protection measure in place, which is ineffective, as the dhColombia team is still being threatened.