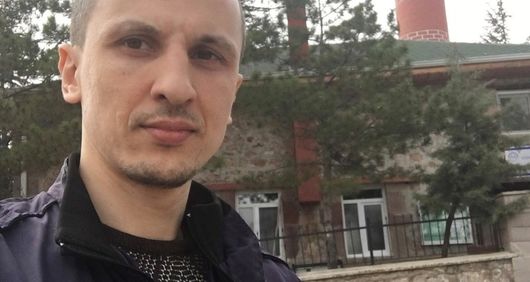 Human rights defender Server Mustafayev, from Russian-occupied Crimea, has been in detention since May 2018, under false terrorism-related charges. On 12 September he was transferred from Crimea to southwest Russia. He is awaiting further transfer from Krasnodar to Rostov-on-Don, where he will face military court, in violation of international law.

He is being detained in a shared four-square metre cell, with appalling sanitation. This amounts to inhuman and degrading treatment. He has been targeted solely for his human rights activism.

People who have opposed the Crimean Peninsula's occupation and illegal annexation by Russia, and human rights violations committed there since 2014, have faced persecution; including harassment, prosecution under trumped-up charges and enforced disappearances. International human rights monitors do not have access to Crimea and independent media are either banned or forced to shut down.

Server Mustafayev is the founder and coordinator of the grassroots movement Crimean Solidarity, in Russian-occupied Crimea. The movement was created on 9 April 2016 in response to political and religious persecution of Crimean Tatars and others by the Russian authorities. The movement brings together activists, lawyers and relatives of those who have been arrested and prosecuted, to ensure they can access legal aid, financial, medical and other vital support.

In the absence of free media, and in light of persecution of all dissenting voices in Crimea following its illegal annexation by Russia in 2014, the movement also seeks to raise awareness on the ongoing human rights violations taking place in Crimea.