Report: Crimes against humanity in Myanmar 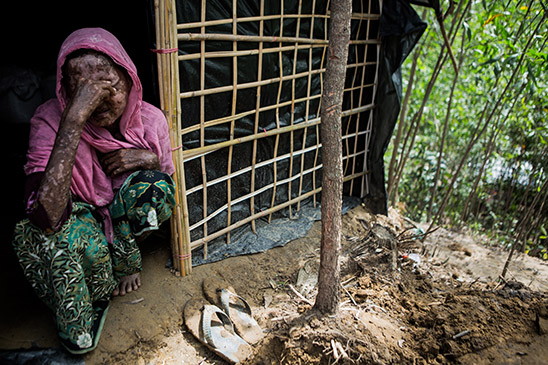 'We got an order to burn down the entire village if there is any disturbance. If you villagers aren’t living peacefully, we will destroy everything.'
Myanmar military officer in late August 2017

Early in the morning of 25 August 2017, a group of armed Rohingya – a minority muslim people from Myanmar – attacked security posts in northern Rakhine State, Myanmar.

This ethnic cleansing of the Rohingya was achieved by a terrifying campaign in which the Myanmar security forces committed countless atrocities, including:

These are crimes against humanity under international law, as they were carried out as part of a vast and deliberate assault on the Rohingya people.

What's in this report?

In this report we reveal evidence that nine of the 11 crimes against humanity listed in the Rome Statute of the International Criminal Court have been committed since 25 August 2017.

This evidence is based on more than 400 interviews carried out between September 2017 and June 2018, including during four research missions to the refugee camps in Bangladesh and three missions to Myanmar, one of which was to Rakhine State. The interviews are overwhelmingly with survivors and direct witnesses to crimes.

We interviewed people from different ethnic and religious communities from northern Rakhine State.

We also interviewed humanitarian aid workers in Bangladesh and Myanmar, medical professionals in Bangladesh who had treated violence-related injuries among Rohingya refugees, analysts of the Myanmar military, diplomats, journalists, and local
administrative officials in Myanmar.