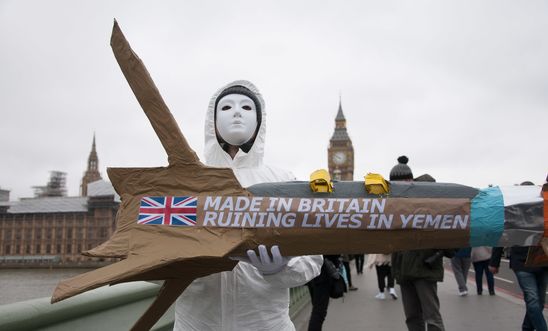 Responding to the United Nations Human Rights Council vote today to renew the mandate of the Group of Eminent Experts which has been investigating violations and abuses of international law committed by all sides in Yemen, Kevin Whelan, Amnesty International’s Senior Advocate, said:

“Today’s vote sends a clear signal to all perpetrators of crimes under international law in Yemen that impunity is not an option.

“All parties to the conflict - including the Saudi and UAE-led coalition, the Yemeni government and the Huthi de facto authorities - must fully cooperate with the UN investigation team and help facilitate their work.

“This renewal also sends a timely message of support to the Yemeni civilian population, today reeling perhaps more than ever before from the impact of these violations even as they brace themselves for new rounds of violence.”

In September 2017, the United Nations Human Rights Council passed a resolution (number 36/31) to establish a Group of Eminent Experts on Yemen mandated to investigate violations and abuses committed by all parties to the conflict and provide general recommendations on improving respect for and the protection and fulfilment of human rights in Yemen. It was established for a one-year term, renewable as authorised.

The Group of Eminent Experts was established in response to three years of international pressure by Amnesty and other organisations highlighting the fact that existing accountability mechanisms lack the necessary impartiality and independence to carry out their work credibly. As it does not answer to any of the parties to the conflict, the Group of Eminent Experts is able to investigate and report in an independent and impartial manner on violations and abuses committed in Yemen.

Despite numerous incidents during the past three-and-a-half years where the Saudi Arabia-led coalition’s bombing of Yemeni targets has resulted in the destruction of homes, hospitals, funeral halls, schools and factories - killing thousands of civilians, as well as laying waste to Yemen’s already fragile infrastructure - the UK has continued to sell large amounts of arms to Saudi Arabia. Amnesty is calling for the UK to halt all further arms sales to Saudi Arabia where there’s any risk they’ll be used to commit human rights violations in Yemen.

“Ministers absolutely must turn off the flow of arms to the Saudi-led coalition.”