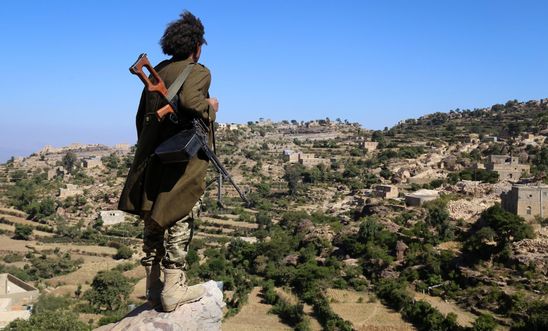 Families of four boys tell Amnesty of sexual assaults, including rapes at a mosque in the city of Ta’iz

An investigation by Amnesty International has revealed that children as young as eight years old have been raped in the Yemeni city of Ta’iz.

The suspected perpetrators - including members of militias backed by the Saudi Arabia-led Coalition - are yet to be held to account. The families of four boys told Amnesty that their sons had been sexually assaulted in a series of incidents over the past eight months.

In two of the four cases - one rape and one attempted assault - families alleged that those responsible were Islahi-aligned militiamen, supported by the Saudi Arabia-led Coalition.

A 16-year-old boy, who says he was raped in late December by an Islahi-aligned militiaman in an Islahi-controlled area of Ta’iz city, told Amnesty:

“He threatened me with his rifle… he began to hit me with the back of the rifle, kicked me and pushed me into the wall to try and knock me out… he then said to me ‘I want to rape you’. I then started to cry… and asked him to consider me like his son. He got angrier and started hitting me more … he grabbed me by the neck and pushed me to the ground and I started screaming and he hit me with the rifle on my neck and raped me.”

The boy’s mother described the evening her son got back home after the incident:

“When he arrived that evening, he went directly to the bathroom. When he came out afterwards, I asked him what was wrong, and he wouldn’t tell me what had happened. He then began to cry, and I started crying. We sat next to each other for three days, both unable to eat or drink or sleep… his psychological state was very poor from the fright and his complexion looked yellow and drained… he just sat there staring into space. He was unable to sit afterwards or go to the bathroom for three days.”

She reported the rape to the Ta’iz Criminal Investigations Department who issued an order, seen by Amnesty, that the forensic medical doctor should issue a report. The doctor, who works in a hospital under the control of the Islahi group, refused. The hospital then asked for money to produce the report but she was unable to afford to pay for it in advance. She said she would pay on delivery of the report, but it was never completed. The mother said:

“The doctor told me there is nothing wrong with your son and wouldn’t produce a report. At that moment, I started shouting at him, ‘Aren’t you afraid of God?’”

According to another testimony, an Islahi-aligned militant attempted to sexually assault a 12-year-old boy last July in Ta’iz, but the boy escaped. A relative of the boy told Amnesty he was tricked into delivering a package to a neighbour’s house by a militiaman who then followed and attacked him:

“He took him into his bedroom and threw him onto the bed and threw his rifle down next to him… he began to threaten him and told him if he screamed or shouted, he would use the loaded rifle... He [militiaman] then went to close the bedroom door and started to undress… at that moment, the little boy got frightened and picked up the weapon and shot the man to defend himself … He then escaped.”

The attacker subsequently died. The family reported the incident to the local authorities but received no protection. They were attacked in their home two days later by militiamen belonging to the same group as the attacker. Three family members were injured, requiring surgery, and one person was killed in clashes. Local authorities held the 12-year-old, his father and two brothers in voluntary detention for two weeks after the attack, to protect them from further reprisals.

In another case, the mother of an eight-year-old boy told Amnesty that her son was raped on at least two separate occasions between last June and October, by both the son of an Islahi imam and his friend at a local mosque. She explained that her son’s behaviour started changing and that he was very often in tears:

“My son told me that [the son of the Imam] locked him in the mosque’s bathroom and put his hand over his mouth, choking him, and he started to undress him … After he finished with him, he let another guy come in and also have his way with my son.”

According to medical reports seen by Amnesty, the eight-year-old boy has since been suffering from impaired mobility, lack of concentration and a concussion as a result of the repeated assaults and beatings. His mother told Amnesty he previously excelled at school, but after the assault was unable to hold a pen or write. She explained that he now suffers from a sleeping disorder and is prone to uncontrollable crying and screaming.

Amnesty also spoke to the father of a 13-year-old boy who says he was raped by the same two men at the same mosque.

“The heartbreaking testimonies of these young survivors and their families expose how the ongoing conflict has rendered children vulnerable to being sexually exploited in a city plagued by weak security and institutions.

“These victims and their families have been left unprotected and alone to face the horrific ordeal of sexual abuse and its aftermath.

“The Yemeni authorities must thoroughly investigate these allegations to signal that these crimes will not be tolerated and to protect the children’s families from reprisal.

“Suspects, including members of the fighting forces and community leaders in trusted positions, must be brought to justice in fair trials.

“Rape and sexual assault committed in the context of an armed conflict are war crimes. Commanders who fail to stop such heinous acts can themselves be responsible for war crimes.”

According to the family of the 12-year-old, the militiamen have not been arrested for the subsequent attack, and they have had to relocate outside Ta’iz due to fear of reprisals, shutting down their family businesses. Similarly, no one has been arrested in relation to the rape of the 16-year-old and the alleged perpetrator - a militiaman - remains at large. Meanwhile, two civilian suspects are currently detained pending trial in relation to the remaining two cases.

Yemeni law provides for the use of the death penalty against sexual violence offenders. Amnesty International opposes the death penalty in all cases without exception. The Convention on the Rights of the Child (ratified by Yemen in 1991) obliges states parties to take all appropriate measures to protect children from all forms of physical or mental violence, including sexual abuse.

No response from Prosecutor General

A pattern of impunity and reprisals has thus far discouraged families from reporting these incidents, especially since suspects are reported to be politically aligned with the local Islahi-controlled authorities. While two civilian suspects are currently detained pending trial in relation to two of the four cases, militia suspects have not been arrested in the remaining two cases. Amnesty has written to the Prosecutor General in Yemen seeking comment and clarification, but has received no response.

Families have faced a variety of impediments in reporting these incidents to the authorities. According to the families and documents reviewed by Amnesty, all four cases were reported directly to the Criminal Investigations Department in Ta’iz. Even though the Criminal Investigations Department directed one of the main hospitals in Ta’iz to examine the three rape survivors and issue medical reports, the hospital failed to implement those orders in one case, despite repeated requests by the victim’s mother. Moreover, the hospital asked for money to produce the report, which the family was unable to afford.

These cases documented by Amnesty do not, however, appear to be the only incidents. Families and local activists reported at least two other cases in which families are too afraid to talk, fearing reprisal from local militias that are largely backed by members of the Saudi Arabia-led Coalition. Two of the four affected families have had to relocate, fearing reprisals from militias.

Like other conflict situations, sexual violence remains underreported in Yemen due to the difficulty of verifying cases because of the sensitivity of the issue.

A recent Amnesty investigation highlighted the risk of the illicit diversion of weapons from members of the Coalition to unaccountable militias - similar to groups in Ta’iz - accused of war crimes and other serious violations. Amnesty is calling on all states to immediately suspend arms transfers to members all parties to the conflict in Yemen.

Since 2015, Ta’iz has witnessed intermittent heavy clashes between Huthi forces and an amalgamation of anti-Huthi forces loyal to the Coalition and the Yemeni government, which intensified during 2018. There have been hundreds of casualties.

Four years of conflict have led to the proliferation of militias on the Coalition and Yemeni government side, with the main ones affiliated with Saudi-backed Islah or Salafist groups. Although they are nominally on the same side of the conflict, these militias have competing agendas and there is frequent infighting.

The city of Ta’iz remains a humanitarian disaster, with the Huthi forces besieging it for nearly four years. Amnesty has previously documented Huthi-imposed arbitrary restrictions on essential medical supplies and the movement of civilians and civilian goods. Amnesty has also documented how Coalition-aligned and Yemeni government forces harassed and intimidated hospital staff and endangered civilians by stationing fighters and military positions near medical facilities, particularly during fighting in late 2016. At least three hospitals were shut down due to threats against staff.