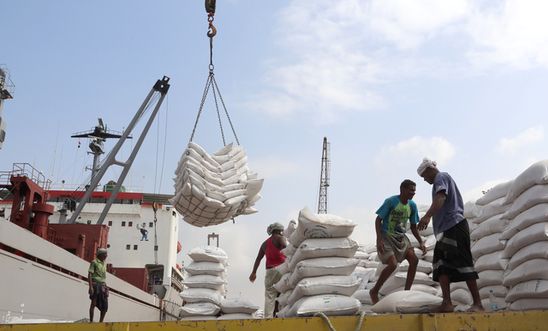 Millions of lives are at risk in Yemen because food, fuel and medical supplies are being deliberately delayed on entry to the war-torn country by the Saudi Arabia-led coalition and then further delayed in distribution by the country’s Huthi authorities, Amnesty International warned in a new report released today.

The 22-page report, Stranglehold, shows how the Saudi-led coalition has imposed excessive restrictions on the entry of essential goods and aid, while the Huthis have obstructed aid movement within the country. These obstacles - compounded by the deadly Saudi-led military assault on the vital port city of Hodeidah - have exacerbated the already dire humanitarian situation in Yemen and violate international law.

Since 2015, the coalition has repeatedly tightened its naval blockade on the Huthi-controlled ports of Saleef and Hodeidah, seriously impeding Yemenis’ access to food.

The restrictions and delays placed on fuel and medical supplies have also contributed to the collapse of the country’s healthcare system. The manner and timing of the tightened restrictions - coming after Huthi missiles were fired at the Saudi capital Riyadh - suggest it could amount to collective punishment of Yemen’s civilian population, which would constitute a war crime. Meanwhile, the Huthi authorities have also created barriers to the delivery of humanitarian assistance within Yemen, with aid workers describing to Amnesty how overly bureaucratic procedures have caused excessive delays.

In a further escalation last week, Yemeni forces backed by the coalition launched an offensive on Hodeidah. Cutting off this crucial supply line would further deepen what is already the world’s worst humanitarian crisis.

Under international humanitarian law, all parties have an obligation to allow and facilitate rapid and unimpeded delivery of impartial assistance for civilians in need, and should ensure the freedom of movement of authorised humanitarian personnel to carry out their work.

“The Saudi Arabia-led coalition’s unlawful restrictions on imports, coupled with the Huthis’ harmful interference with aid distribution, are preventing life-saving supplies from reaching Yemenis who desperately need them.

“The Saudi Arabia-led coalition must end delays on commercial imports of essential goods destined for Yemen’s Red Sea ports and allow the reopening of Sana’a airport to commercial flights. States providing the coalition support, in particular the USA, United Kingdom and France, should pressure them to do so.

“This man-made humanitarian crisis cannot be ignored any longer. The world must stop looking the other way while the life is slowly suffocated out of Yemen.”

Saudi Arabia started to inspect vessels and delay or restrict access to Yemen’s Red Sea ports in 2015, claiming it was enforcing an arms embargo set by UN Security Council Resolution 2216. As a result, in 2015 the UN Verification and Inspection Mechanism (UNVIM) was established to clear commercial vessels destined for Yemen’s Red Sea ports while ensuring compliance with the arms embargo.

Nevertheless, the coalition maintained its inspections of ships, even after UNVIM had cleared them to proceed to port, subjecting them to excessive delays. Vessels travelling to Yemen’s Red Sea ports had to wait for coalition clearance for an average of 120 hours in March and 74 hours in April this year.

On 15 March, the UN Security Council called on member states to inspect vessels already cleared by UNVIM “in an efficient and timely manner”. The coalition has continued to ignore this call and to misuse the inspection regime, preventing the delivery of essential goods and humanitarian aid. These delays have exacerbated a crippling fuel shortage, which has reduced access to food, clean water and sanitation and contributed to the spread of preventable diseases. According to five medical staff interviewed by Amnesty, the lack of fuel has also made it harder to run hospitals.

“These excessive inspections are having a catastrophic effect on Yemen.

“By delaying vital supplies such as fuel and medicine getting into the country, the Saudi-led coalition is abusing its powers to cruelly inflict additional hardship on the most vulnerable civilians in Yemen.

“Blockades that cause substantial, disproportionate harm to civilians are prohibited under international law.”

Amnesty spoke to 11 senior aid workers in Yemen who all said the Huthi authorities were using excessive and arbitrary bureaucratic procedures to restrict the movement of humanitarian staff and aid. In one incident, an aid official described how, once supplies reached the country, it took the organisation two months to move the supplies out of Sana’a: “The most difficult part was getting the aid out of the warehouse once it was in Yemen.”

According to the aid workers, the Huthi authorities are also attempting to control the delivery of aid and to influence who receives it, and in which areas.  One aid official told Amnesty they were “often told by Huthi forces to hand over the aid and that they would distribute it”. Several aid workers described incidents in which government workers had demanded bribes from humanitarian groups in order for them to approve projects or movements of staff.

“The Huthi forces’ repeated, excessive, arbitrary interference with the delivery and distribution of aid is causing untold damage to civilians whose lives are being ruined as a result.”

Amnesty is calling on the UN Security Council to ensure that all parties to the conflict in Yemen allow prompt and unhindered humanitarian access to UN agencies and humanitarian organisations to deliver food, fuel, medicines and medical supplies to civilians in need across Yemen. It should impose targeted sanctions against those responsible for obstructing humanitarian assistance and for committing other violations of international humanitarian law.

Between December 2017 and this earlier month, Amnesty conducted interviews with 12 aid workers, as well as with six doctors, three other medical staff and five local community activists located in Sana’a, Hodeidah and Ta’iz. All those interviewed spoke to Amnesty under condition of strict confidentiality due to their concern that their public identification could expose them and their families to serious risk or undermine their ability to carry out their work.

Earlier this week, a group of arms control campaigners wrote an open letter to the International Trade Secretary Liam Fox reiterating their longstanding calls for the UK to suspend UK arms sales to the Saudi Arabia-led military coalition operating in Yemen.

“With yet another humanitarian catastrophe looming in Hodeidah,” said Kate Allen, Amnesty International UK’s Director, “the UK must finally turn off the flow of arms to the Saudi-led coalition in Yemen”.