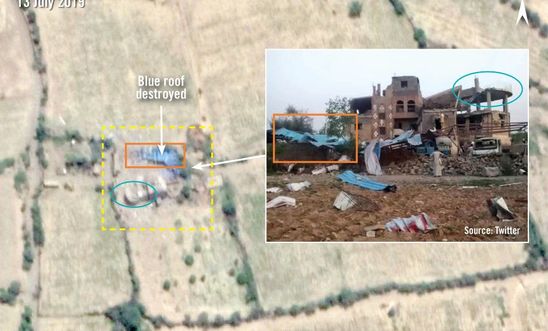 Three children among those killed in village of Warzan

A US-manufactured bomb was used in a Saudi and Emirati-led airstrike on a residential home in Yemen which killed six civilians - three of them children - Amnesty International revealed today, after detailed research into the attack.

The airstrike, which had previously gone uninvestigated, took place in Warzan village in the Yemeni governorate of Ta’iz on 28 June.

The attack wiped out the entire al-Kindi family - from the 62-year-old father and grandfather Abdelqawi Abdu Ahmed al-Kindi, to his youngest grandchild, Ayman, aged six (see full family details below).

Amnesty spoke to two of the family’s relatives and two local residents, and also analysed satellite imagery and photo and video materials from the aftermath to corroborate eyewitness reports.

Analysing photos of weapon remnants dug from the site by relatives, Amnesty’s arms expert used product data stencilled on the guidance fin to identify the weapon as a 500-pound, laser-guided GBU-12 Paveway II, manufactured by US arms company Raytheon. This is the latest evidence that the USA is supplying weapons being used by the Saudi and Emirati-led coalition in Yemeni attacks amounting to serious violations of international humanitarian law.

One relative of the al-Kindi family told Amnesty:

“We buried them the same day because they had turned into severed limbs. There were no corpses left to examine. The flesh of this person was mixed with that person. They were wrapped up [with blankets] and taken away.”

One eyewitness to the attack told Amnesty:

“I was around three minutes’ walk away working at a neighbouring farm. I heard the plane hovering and I saw the bomb as it dropped towards the house. I was next to the house when the second bomb fell … and I got down onto the ground.”

Witnesses told Amnesty there were no fighters or military targets in the vicinity of the house at the time of the attack. The closest possible military target to the airstrike was a Huthi operations room on Hayel Saeed Farm almost a mile away, but this had stopped operating more than two years previously after being hit by coalition airstrikes.

A second airstrike occurred at the al-Kindi house approximately 15 minutes after the first, indicating that the pilot wanted to completely destroy the property. The house was struck again five days later while relatives of the family were inspecting it - no-one was injured in this attack.

Since March 2015, Amnesty’s researchers have investigated dozens of airstrikes in Yemen and repeatedly found and identified remnants of US-manufactured munitions.

According to the Defence Security Cooperation Agency, in 2015 the US Government authorised the sale of 6,120 Paveway guided bombs to Saudi Arabia. In May this year, President Trump bypassed the US Congress to authorise further sales of Paveways to Saudi Arabia and the UAE.

“This attack highlights, yet again, the dire need for a comprehensive embargo on all weapons that could be used by any of the warring parties in Yemen.

“Despite the slew of evidence that the Saudi and Emirati-led coalition has time and again committed serious violations of international law, including possible war crimes, the USA and other arms-supplying countries such as the UK and France remain unmoved by the pain and chaos their arms are wreaking on the civilian population.

“Arms-supplying states cannot bury their heads in the sand and pretend they do not know of the risks associated with arms transfers to parties to this conflict who have been systematically violating international humanitarian law.

“By knowingly supplying the means by which the Saudi and Emirati-led Coalition repeatedly violates international human rights and international humanitarian law, the USA - along with the UK and France - share responsibility for these violations.”

A recent report by the Group of Eminent Experts on Yemen, established by the UN Human Rights Council, concluded that the repeated patterns of coalition airstrikes in the country raise “a serious doubt about whether the targeting process adopted by the coalition complied with [the] fundamental principles of international humanitarian law”. The report also documents a range of serious violations and abuses by all sides to the conflict in Yemen - a conflict which the UN says will have killed over 233,000 Yemenis by the end of 2019, both as a result of the fighting and the humanitarian crisis. The UN Human Rights Council is slated to vote on the renewal of the Group of Eminent Experts today or tomorrow. Amnesty, in coalition with other organisations, is urging countries to support the Human Rights Council resolution extending and enhancing the group’s mandate.